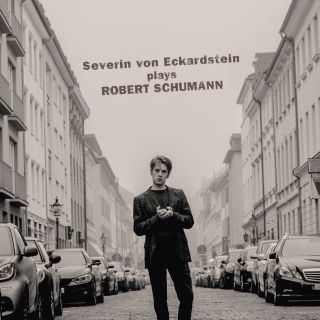 - Severin is a young German pianist of the highest qualities as a soloist and chamber music partner for many international artists; moreover he runs a chamber music Festival in Berlin “Sound Bridges”/”Klangbrücken”.

'The term 'fantasia', in music, mainly refers to a free type of structure. Throughout history, the genre has allosed composers to jot down their musical ideas directly, like an improvisation, just as they first spring to mind. The fantasia became a popular instrumental genre in the 1800's, when it started to feature the dreamy, 'phantastic' element even more prominently; the piano and its universe of polyphony likewise played an essential role. The fantasia was thus an ideal genre for Scumann, whose music I view as the quintessence of German High Romanticism. Schumann's music is full of expression and driven by passion; at the same time it is disarmingly honest and private. Its textural sonority is full of variety, yet it always remains decent and straightforward, never attempting to posture with easy, flashy, superficial effects or by adding purely virtuosic embellishments. In my imagination, this music often evokes placid romantic scenes imbued with good-naturedness and a certain vulnerability: people of the simple classes, courtly settings, flowery childish joys, or the secretly shared yearnings of two lovers. It is as if such figures or allegories were placed in the midst of mysterious landscapes, lovingly painted with an eye for detail, and impressively set to music. Schumann often used teh word 'Fantasy' in the titles of his works - frequently as part of a compound noun, Fantasiestüc, or also sporadically Fantasietanz (dance). The music in such pieces is often of choice quality and profoundly expressive... (Eckardstein)

Severin von Eckardstein, one of the leading German pianists of his generation, has an already substantial

record of solo recitals and concerto performances on major houses around the world. Born in Duesseldorf, Germany in 1978, the pianist has won prizes numerous international competitions, e.g. “Ferruccio Busoni” in Bozen (1998), the “Leeds International Piano Competition” (2000) and “José Iturbi” in
Valencia (2002), as well as winner of the ARD-Competition in Munich (1999) and the “Grand Prix International Reine Elisabeth” in Brussels (2003). He played many highly acclaimed concerts, for example in Berlin, Munich, Moscow, London, Paris, New York, Amsterdam, Hong Kong, Tokyo and Seoul. He has performed with conductors such as Valery Gergiev, Philippe Herreweghe, Lothar Zagrosek and Marek Janowski, and made important debuts, e.g. with the Royal Concertgebouw Orchestra under Paavo Järvi with the Dallas Symphony Orchestra conducted by Jaap van Zweden. Many of Von Eckardstein’s concerts have been recorded and broadcasted by major broadcasting corporations. Repeatly he followed the invitation “Meesterpianisten” in the Concertgebouw Amsterdam, von Eckardstein opened the gala concert celebrating the series’ 25th anniversary. Von Eckardstein’s education was predominately shaped by his teachers Prof. Barbara Szczepanska, Prof. Karl-Heinz Kämmerling and Prof. Klaus Hellwig, University of Arts, Berlin, where he also successfully completed his concert exams. He took private lessons from teachers such as Alfred Brendel and participated in master classes instructed by Vitalij Margulis, Karl Ulrich Schnabel, Alicia de Larrocha, Leon Fleisher and Menahem Pressler. He himself has served as master class instructor in South Korea and Finland. Chamber music also plays a significant role in his repertoire with performances at festivals. He often has played concerts with highly renowned musicians, e.g. Andrej Bielov, Barnabasz Kelemen, Franziska Hölscher, Judith Ermert, Danjulo Ishizaka and Nicolas Altstaedt. Together with Franziska Hölscher he recently founded a new series of chamber concerts named “Klangbrücken” in Berlin (Konzerthaus). His CD recordings with compositions by Medtner, Skrjabin, Wagner, Schubert and others received great acclaim.