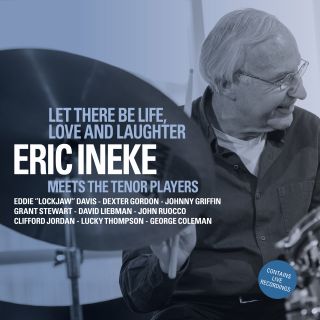 Let There Be Life, Love and Laughter

- The Dexter track might be one of Dex's most intense and adventurous live outings recorded....a fantastic take on one of the great tunes from the jazz repertoire, Benny Golson's Stablemates.


As the title of the book that Eric and I co-authored The Ultimate Sideman demonstrates, Eric is the epitome of what a total rhythm section player should demonstrate. That is recognizing exactly what is musically needed to make any soloist comfortable and relaxed so they can concentrate on sounding at the top of their game. This historic album provides total proof of how Eric accomplishes this challenging task. The instrumental focus is specially on tenor players featuring some of the all-time greats. With Eddie Davis, Johnny Griffin, Clifford Jordan, George Coleman, Dexter Gordon, Grant Stewart, Lucky Thompson, John Ruocco and I am honored to say myself, each track clearly highlights Eric's sympathetic and on some of the tunes very intense playing. In fact the Dexter track might be one of Dex ́s most intense and adventurous live outings recorded....a fantastic take on one of the great tunes from the jazz repertoire, Benny Golson ́s “Stablemates.”

All of us who have toured with Eric know how generous his spirit is, with a great sense of humor and grace not only on the bandstand but on a day to day basis as he organizes all the many levels of logistics required to bring these gigs off. This is an historical recording that I am sure took a lot of work to put together traversing decades from 1968 to 2014. The music clearly shows the way it used to be and in some cases still exists.... a soloist joins a rhythm section for a few sets playing standards, communicating non-verbally and if it is Eric Ineke on drums, for sure, SWINGING!! Happy 70th my friend.

Eric Ineke (born Haarlem, April 1,1947) is a Dutch jazz drummer who started his career in the 1960s. In 1969 he made his first record with tenor saxophonist Ferdinand Povel and through the years he has played with the Rob Agerbeek Quintet, the Rein de Graaff/Dick Vennik Quartet, the Ben van den Dungen/Jarmo Hoogendijk Quintet and the Piet Noordijk Quartet. During his career he has also played with numerous international, mainly American soloists like Dexter Gordon, Johnny Griffin, George Coleman, Shirley Horn, Dizzy Gillespie, Al Cohn, Grant Stewart, Jimmy Raney, Barry Harris, Eric Alexander and Dave Liebman, recorded numerous CD’s and appeared at many national and international jazz festivals (North Sea Jazz Festival, Nice Jazz Festival, Pescara Jazz, San Remo, Athens, Toronto Jazz Festival, Montreal International Jazz Festival and New York). For more than 35 years he has been the drummer of the Rein de Graaff Trio and since 2006 has led the Eric Ineke JazzXpress, a quintet in the hard-bop tradition. With this quintet, Eric Ineke got invited in 2011 by the American Jazz Museum in Kansas City with jazz singer Deborah Brown where they did a few performances, including one on Kansas Public Radio and a CD recording produced by Bobby Watson.  Eric Ineke also teaches at the Royal Conservatory of The Hague. Eric Ineke is giving masterclasses all around the world. In April 2012 he released his first book The Ultimate Sideman, in conversation with Dave Liebman.