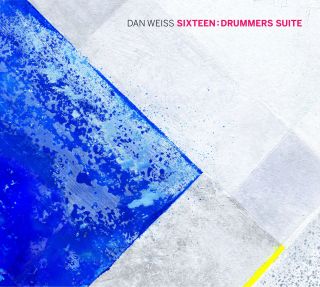 - With Sixteen: Drummers Suite, Weiss has realized another exceptional achievement, one that continues to reimagine the possibilities of what a large ensemble can do in a jazz context.

Sixteen: Drummers Suite is the highly anticipated follow-up to Fourteen, drummer/composer Dan Weiss’s brilliantly ambitious opus for fourteen musicians. Nate Chinen of the New York Times named it one of his top ten releases of 2014, and Peter Hum in the Ottawa Citizen called it “a blazingly creative effort. Ultimately, its audacious and unconventional success is uplifting, a testament to whats possible and what can be imagined.” Sixteen is even more daring: The ensemble is now comprised of sixteen musicians, featuring drums, acoustic bass, guitar, piano, synthesizer, three saxophones, two trombones, tuba, flute, three voices, harp, glockenspiel, organ, vibraphone, tabla and percussion, giving the work even greater sonic scope. Like on Fourteen, the work is an unique amalgam of jazz, Indian music, prog rock, contemporary classical music, and other completely idiosyncratic influences, all woven by Weiss into a completely sui generismusical tapestry.

Dan Weiss began playing the drums at the age of six. He received his bachelor’s degree at Manhattan School of Music with a major in jazz percussion and minor in classical composition. Soon after getting his formal education, he began touring the world and recording with musicians such as David Binney, Lee Konitz, Rudresh Mahanthappa, Miguel Zenon, Kenny Werner and many others.

In addition to the drums, Weiss has been studying the tabla under his guru Pandit Samir Chatterjee for almost 20 years. This apprenticeship has been a major influence in his musical aesthetic, exemplified in two of his records where he performs classical Indian repertoire on drum set. David Adler All About Jazz ) wrote, “Weiss is arguably unique among today’s jazz drummers, transposing ideas from his tabla study to the drum kit, as heard most clearly on Tintal Drum Set Solo (Chhandayan , 2005) and Jhaptal Drum Set Solo. Weiss was also named “The Top Up and Coming Percussionist” two years in a row in the 60th and 61st annual Downbeat’s Critic’s Poll and was featured in the New York Times as “One of the Five Most Promising Drummers of the New Generation.”

Weiss has led his trio, which includes Jacob Sacks on piano and Thomas Morgan on bass, for over a decade. Their two releases “Now Yes When” and “Timshel” have been critically acclaimed for their unique approach to song structure and endlessly creative improvisation. Weiss’s most ambitious work to date is “Fourteen,” a 14 piece ensemble composition that features a rhythm section, horns, voices, harp, percussion and organ.