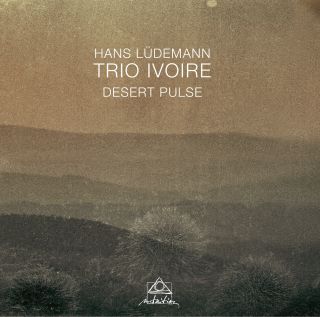 - A synthesis of West African music and jazz.

In 1999, the jazz pianist Hans Lüdemann from Cologne met the balafon player Aly Keita from the Ivory Coast during a trip to West Africa. Since they hit it off musically right away, they founded Trio Ivoire that has been exploring the connections between jazz and West African music ever since.
Aside from Lüdemann, Aly Keita and the drummer Christian Thomé, the new album “Desert Pulse” features guest musicians Reiner Winterschladen (trumpet) and Ballaké Sissoko (Kora), making the spectrum of sounds even more colourful. The result is music that builds bridges between Africa, jazz and Europe. With its relaxed pace, it represents a counterpoint to the hyped up music of the industrial north.

Hans Lüdemann (b. 1961) studied jazz piano with Joachim Kühn and classical piano at the Hamburg Conservatoire. He then studied with Dave Holland and Anthony Davis at the Banff Centre in Canada as well as jazz piano with Frank Wunsch and Rainer Brüninghaus at the Cologne Musikhochschule. Lüdemann has performed with Eberhard Weber and Jan Garbarek, Paul Bley, Marc Ducret, Heinz Sauer, Chiwoniso, Mark Feldman, the hr Jazz Ensemble, and Angelika Niescier, among others. He works, first and foremost, on his own projects which are characterized by his predilection for African music. These projects include the TRIO IVOIRE, solo programmes, the trio ROOMS, the T.E.E. Ensemble and duos with Reiner Winterschladen and Toumani Diabaté. Lüdemann’s music is recorded on more than 20 CDs, among them “Aphorisms” (1991), “the natural piano” (1995), “Futurism” (1998), “Touching Africa” (2006), “Between the Keys” (2009) and the CD box “die kunst des trios”. He is a regular guest on international concert stages, clubs and festivals. As a composer, Lüdemann has written a body of works from solo to orchestral music. From 2003 to 2007 he was a member of the federal composition jury for the Villa Massimo. Lüdemann was a lecturer at the Cologne Musikhochschule from 1993 to 2008 and has taught at the European Academy of Montepulciano/Italy between 2001 and 2007. In 2009/10 and 2015/16 he was Cornell Visiting Professor at the Swarthmore College/USA.

Aly Keïta (b. 1969) is an Ivorian balaphone player whose family had been musicians for generations. He spent his childhood in Abidjan and Mali, where Keïta learned to play a traditional pentatonic balaphone. His teacher was Zouratié Coulibaly. In 1986 he met Georges Makinto, who encouraged him to play jazz music. Keita, who creates all instruments by himself, developed his own diatonic balaphone, which opened up new possibilities and styles. His performance is characterized by a refined taste and the absolute balance between tradition and modernism, perfection and authenticity, with his audience being infected directly by his enthusiasm. Keïta has performed with internationally renowned artists such as Pharaoh Sanders, Amadou & Mariam, Trilok Gurtu, Lukas Ligeti, Rokia Traoré, Joe Zawinul, Gilles Renne, Philippe Sellam, Linley Marte, Hans Lüdemann and Steve Argüelles.

Christian Thomé (b. 1970) – His previous oeuvre made Christian Thomé work with various musical styles. His projects range from contemporary jazz and freely improvised music to world music, experimental electronic and pop music to classical music. As a sideman, Christian Thomé has worked with the great musicians of the national jazz scene, like Dieter Manderscheid, Markus Stockhausen, John Goldsby, and Till Brönner and many others. In addition, he has worked with big orchestras like the Hamburg Symphony Orchestra or the Philharmonic Orchestra of Trieste. He toured the Middle East with the world-music ensemble Schäl Sick Brass Band for the Goethe Institute and performed on many festivals at home and abroad. He tours with various ensembles, such as Trio Ivoire, Niobe, Trio Stockhausen/Comisso/Thomé, Nanoschlaf, Alony and the Bliss. Thomé is a lecturer of jazz percussion, jazz ensemble and subjectrelated teacher training at the Institute of Music at the University of Osnabrück. In addition, he works as a private and music school teacher.

Reiner Winterschladen (b. 1956), trumpet, has taken an active part in the musical genres of rock (Westernhagen, The Element Project), funk and electro productions (Trance Groove, Nighthawks) as well as in film music since 1979. Winterschladen has performed with Dieter Manderscheid, Radu Malfatti, Achim Krämer, Tony Oxley, Pee Wee Ellis, Ekkehard Jost, and Ali Haurand, among others. Winterschladen is one of the great improvising artists on his instruments and one of the leading trumpet players in Germany. Since 1995 he has been a member of the NDR Big Band. For his work in the band Blue Box (now nuBox), Winterschladen was awarded the arts prize of the city of Düsseldorf in 1985.

Ballaké Sissoko (b. 1968), the son of the famous Griots Djelimady Sissoko, is a brilliant kora player. He has worked with Toumani Diabaté and Taj Mahal, among others. His first album with Toumani Diabaté (kora) and the singers Alboulkadri Barry and Rokia Traoré as well as Fanga Diawara, solo violinist of the Mali National Instrumental Ensemble, was released in 2005, followed by another CD with chamber music in 2009, the result of his collaboration with the classical cellist Vincent Ségal (bumcello). The album “At Peace” was released in 2013.