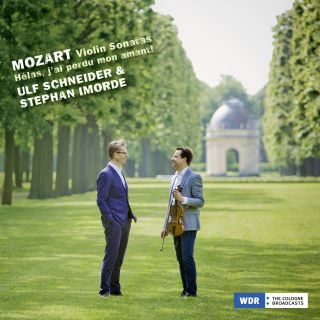 Catalog number: AVI 8553372
Releasedate: 05-05-17
- Ulf Schneider is the primarius of the Jean Paul Trio and the Bartholdy Quintett

- The readings are not on this CD, but the liner notes explain the connection.

The works on this recording form the basis for a recital featuring readings of Constanze Mozart's letters. The album does not include the readings. ''Helas, j'ai perdu mon amant'' is the title of the project that gave rise to the recordings on this album. What lies behind the title you have chosen? Stephan Imorde: For quite some time we had already wanted to associate text and music on the concert podium in order to place music in a new context. Our idea was to view Mozart from the perspective of his wife Constanze: in our attempt to picture how she must have perceived Wolfgang's life, we embarked on an imaginary journey. Ulf Schneider: Very few letters written by Constanze have been preserved. Nevertheless, from the great number of letters her husband sent her, we can surmise that the two were emotionally very close. On the basis of those letters, music journalist Jurgen Otten has drawn up a fictitious diary. In our project we hold a musical dialogue with acress Fritzi H

For over 20 years, the Ulf Schneider and Stephan Imorde duo has been profoundly impressing audiences and critics wherever they perform. The Neue Osnabrücker Zeitung recently wrote: “All the magic ingredients a duo needs in order to captivate an audience for two entire hours, violinist Geiger Ulf
Schneider and pianist Stephan Imorde possess them in abundance. Thanks to their virtuoso mastery of their instruments and a sparkling profusion of ideas, they can embark on daring exploits. […] Such feats require no further explanation: the audience simply holds its breath in awe.”

The duo has given guest performances in renowned concert halls such as the Laieszhalle in Hamburg and the Festspielhaus in Baden-Baden; they have accepted invitations to appear at the music festivals of Schleswig-Holstein, Ludwigsburg, and Mecklenburg-Vorpommern, as well as the Gezeiten Festival in East Frisia and the Mozart Festival in Würzburg. Many public classical music stations such as NDR (Hamburg), WDR (Cologne), and particularly Hessischer Rundfunk (HR, Frankfurt) invite the duo on a regular basis to perform recitals and make recordings that are frequently broadcasted. In programmes that associate literature with music, the duo has collaborated with well-known actors and actresses including Martina Gedeck, Sophie von Kessel, Gudrun Landgrebe, Angela Winkler, Fritzi Haberlandt, Rufus Beck, Stefan Hunstein, and Stefan Kurt.