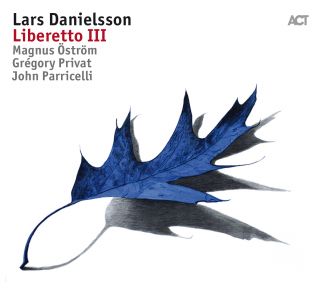 Catalog number: ACT 98402
Releasedate: 02-06-17
- Lars Danielsson, who consummate craftsman of sound on both cello and bass

- All twelve tracks are compositions by Lars Danielsson


For Lars Danielsson, that consummate craftsman of sound on both cello and bass, the power of music resides in melody. It is the heart from which everything else develops, and his ‘Liberetto‘ ensemble has stayed true to this principle again in its third album. All twelve tracks are compositions by him, and they sum up what ‘Liberetto‘ is all about: through keeping structure and freedom in such a fine balance, the musical expression acquires an almost weightless sense of poise and easefulness. And binding it all together is the wonderful interaction of the musicians. Whether they are playing unison lines, solo-ing and accompanying, or engaging in interplay, the ball is generously and deftly passed from one player to another.

“The band has developed massively since 2012,” reflects Danielsson. “We have played together so much, we all seem to have a sixth sense now. And that helped us to make the new album more varied and colourful, to take off in even more directions.” However, one member of the original quartet is no longer there: “Tigran, the pianist on both of the first albums. But it happened that Danielsson became aware of the extremely talented French pianist Grégory Privat. His origins are in the Caribbean island of Martinique. “He is a fantastic addition. Grégory is a hugely gifted storyteller at the piano, with loads of rhythmic sensitivity.”

“Lars Danielsson has a knack of forming great bands", Stuart Nicholson wrote in Jazzwise in 2014.“He manages to realise the potential of his musicians in directions even they had not imagined.” With ‘Liberetto III‘, he has done it again, and produced a beautifully constructed, and yet deeply felt album.

Swedish bassist, cellist, composer and arranger Lars Danielsson is well-know and admired throughout the International jazz scene for his lyrical playing and strong groove. Born in 1958, he is a musician with particularly broad interests. At the conservatory in Gothenburg he had studied classical cello, before changing to bass and to jazz. As a bassist he has a uniquely rounded sound, which is as lyrical as powerful.

The "Lars Danielsson Quartet" with former Miles Davis saxophonist David Liebman, pianist Bobo Stenson and legendary ECM drummer Jon Christensen has received a lot of recognition and numerous awards during the 18 years of its existence. Danielsson has released ten solo-albums since 1980 with his quartet and guests such as Alex Acuña and John Abercrombie. The Quartet has been a testing ground for Danielsson’s work as a composer and arranger, which has extended over the last years to include both - symphony orchestra and big band music. He has worked with Denmark’s Radio Concert Orchestra as well as the JazzBaltica Ensemble as a composer, arranger and producer.

In 2007, he received a commission for a piece with the Gothenburg Symphony Orchestrafeaturing himself as a soloist together with Leszek Moždžer. He has also received a commission from the NDR Big Band and Wolfgang Haffner to write a piece for the JazzBaltica Festival 2007. Furthermore, he has been working with the St. Petersburg Symphony Orchestra in collaboration with Vytas Sondeckis and Bugge Wesseltoft.

His 2008 album “Pasodoble” was a huge success. Jazzwise UK wrote about Danielsson’s collaboration with Polish pianist Leszek Moždžer: “A clarity of thought and execution rarely encountered in jazz.”

“Pasodoble” was followed by another collaboration with Leszek Moždžer on the 2009 album “Tarantella”. Once more the album caused enthusiastic reactions by Jazzwise: “Easily Danielsson’s finest album to date, it also numbers among the finest albums in the ACT catalogue.”