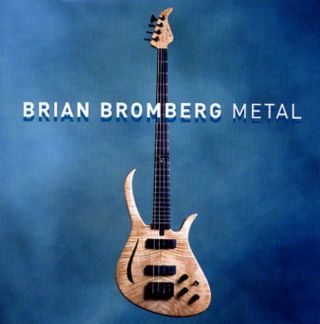 Catalog number: ART 7002
Releasedate: 21-02-15
Brian Bromberg, a highly versatile bassist who can play straight-ahead jazz, fusion, smooth, and adventurous music with equal skill, is a masterful tapper too. The results are nine rock-oriented originals played with plenty of spirit, passion, and fun in addition to the expected virtuosity.

World-renowned acoustic and electric bassist Brian Bromberg hasn’t released an album in the U.S. since 2012, a fact that might not have been cause for concern if you know that at one point he released three albums in one year. Every man deserves a break. However, once you realize that this chameleon with over 20 projects in his catalog recently had reason to believe that he might never play music again, you understand the gravity of his latest acoustic jazz project, Full Circle—one he says may well be the most important record of my career.”

Like all of his work, Bromberg’s latest features a stellar cast that includes trumpeter Arturo Sandoval; saxophonists Bob Sheppard, Kirk Whalum and Doug Webb; pianists Randy Waldman, Mitch Forman and Otmaro Ruíz; and percussionist Alex Acuña. The project also finds “the man that refuses to sit still” mixing styles from New Orleans funk and a legit jazz cover of Michael Jackson’s “Don’t Stop ‘Til You Get Enough” to Cubop—with a sizzling, relentless swing throughout. But the aspects that make this project resonate deeper than anything Bromberg has done prior boils down to a series of life changing events, career firsts and the magic of today’s technology meeting mediums of old.

A freak accident that Bromberg had at his home a couple years ago resulted in him breaking his back in two places with severe trauma. The fall nearly debilitated him requiring extensive rehabilitation to stand and walk, let alone cradle an upright bass properly or strap an electric bass on his back. Through sheer intestinal fortitude, exhaustive work, and the love and support of the woman in his life, Bromberg made an amazing recovery. When he did, a familial spirit guided him to make an album that returned him to his roots in acoustic jazz. That spirit is that of his father, Howard Bromberg, a once-busy drummer in Tucson, Arizona (where Bromberg was born) who inspired both his sons to play drums as well.

Full Circle opens and closes with the tunes “Jazz Me Blues” and “Washington and Lee Swing” that were originally recorded by the senior Bromberg with a band of friends onto a one-off acetate. Spiritually moved by a desire to play with his late father—something he never got to do when he was alive due to a stroke he suffered just when Bromberg became proficient on bass—he copied the platter with a USB turntable, had the file cleaned up at Oasis Mastering then overdubbed himself in his home studio playing bass in his dad’s old quintet.

“A few really amazing things happened to me when I was recording those tracks with my father; those tracks originally were recorded before I was born, so it was such a trip playing with my Dad before I was even on this planet! When I was playing with him I realized at that moment where I got my time feel and swing from, it was effortless to play with him, mind-blowing actually. I guess the experience that inspired the whole concept of this album was feeling his time feel and swing inspired me to start playing drums again, because it felt so good.”

That sentimental journey inspired Full Circle. Bromberg seamlessly laid down rhythm tracks for bass, drums and “guitar” (the latter facilitated by playing melodies and solos on the higher pitched piccolo bass) on every song. As a bassist, Bromberg playing the piccolo bass with his fingers affords him a unique sound (much like guitarist Stanley Jordan) from the majority of guitarists that play using picks.

“That’s where the Full Circle concept came around. I didn’t know if I was ready to do it but, spiritually, I felt that my father wanted me to do it and to do it now.”

Breaking down his methodology, Bromberg shares, “When I wrote the tunes, I made demos with swinging drum samples that I programmed just to hold down time, and then I played reference piccolo bass parts and regular bass parts to make a musical foundation. Then I had the piano players come over and I’d play drums live with them for interaction. The point is, by the time I played drums to it, I had good swinging bass parts to lock my drum parts to or vice versa. I added all my piccolo bass (and the horn players’ solos) last. I’m proud that I don’t sound like ‘a good drummer for a bass player.’ It doesn’t sound overdubbed and the feel of the pocket is righteous. Because I don’t have the facility of a drummer that’s played for 45 years, there’s more space than a normal drummer would leave which gives it a unique sound.”

Bromberg is among the proud few to have a solid foundation in traditional jazz yet enjoy success in smooth jazz. This explains the accessibility of the songs that comprise Full Circle. “The smooth jazz world helped me understand the power of reaching people and what that means beyond the myopic world of being a virtuoso. It’s helped me become a more melodic and storytelling improviser.”

Qualifying himself as one through whom songs are mostly channeled than labored over, Bromberg walks us through a few of the numbers’ origins.

“I wrote the title track ‘Full Circle’ on a session playing for trumpeter Till Brönnerat EastWest Studios. Messing around on a break, the tune just showed up.

“People will assume ‘Saturday Night In The Village’ is about Greenwich Village but that tune popped up on a Saturday night in my living room in Valley Village.

“‘Naw’lins!’ felt like Zydeco, so instantly I was hearing accordion and violin. The amazing Kirk Whalum’s playing on this is so soulful; no one could have done better.

“I wrote ‘Boomerang’ for Riva, a company that makes phenomenal Blue Tooth power amps. They fell in love with ‘Speak Low’ from my Wood album and wanted to use it for their demos but Warner Chapell that controls the copyright wanted a huge sum of money to use it. So they asked, ‘Can you write something else like it?’

“For ‘Havana Nights (aka Havana Nagila),’ I wanted something with trumpet on it. I used to play in Arturo Sandoval’s band. He’s Cuban and he’s amazing. I joked about titling it ‘Havana Nagila’ and my engineer Tom McCauley insisted, ‘How many Jewish guys are going to write a Cuban tune? You can’t not do this’—thus, my subtitle.

“I wrote ‘Susumu’s Blues’ inspired by Susumu Morikawa, a record executive for King Records in Japan and a very good friend. I first recorded it for him on a solo acoustic bass album called Hands (never released in the U.S.). I originally only hired Craig Fundyga to play a line on ‘Havana Nights.’ He sounded so good, I pulled out ‘Susumu’s Blues,’ built a section for him so he could blow a solo and it came out great. I’d never recorded vibes as a lead instrument. If you like MJQ [The Modern Jazz Quartet], you’ll dig this vibe—pun intended.”

Summing up the crafting of this album, Bromberg states, “Full Circle has been incredibly important to me—more as a human being than as an artist; a cathartic experience. It became something life changing and much bigger than me. I don’t know what the ‘statement’ is—and it’s not like I’m trying to make one—it’s just honest and real. There’s a lot of expediency and determination in my notes—very simple music that’s not intense yet has intensity. There’s so much passion even the mellow tunes are played with emotional power.

“This album is just a swinging, in-your-face traditional jazz album with simple tunes that are easy to sing along with and remember, but have a foundation in hardcore ‘real’ jazz.” Bromberg concludes. ”I hope people enjoy this album for what it is and what it means to me vs. judging it for what it’s not.”