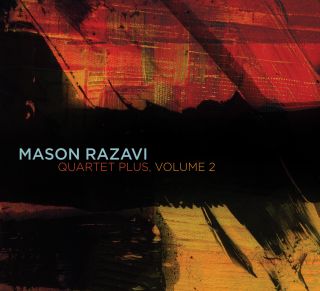 - Guitarist Mason Razavi's second volume of his "Quartet Plus" series

From delicately scored ballads to a raucous take on “Caravan,” Bay-Area guitarist Mason Razavi's second volume of his "Quartet Plus" series inhabits the great traditional jazz forms while enhancing them with modern textures and rhythms, creating a work that should leave jazz aficionados of various stripes nodding in approval. Working with pianist Bennett Roth-Newell, bassist Dan Robbins and drummer Cody Rhodes, the "Plus" is a five-piece horn section featured on several dynamic and intricately arranged compositions. "Evocative storytelling is the hallmark of Razavi's music." - All About Jazz

Mason Razavi is a jazz guitarist, composer/arranger, educator, and recording artist living in the San Francisco Bay Area. He leads a quartet and nonet performing his original music and is a frequently requested sideman and accomplished solo guitarist. His albums have earned praise from critics while charting in the U.S. and receiving radio play internationally. Razavi has been described as a "thoughtful player and composer that offers the listener an introspective experience of deeper meaning" by Jazz Times. In addition to countless performances at clubs and theaters, he has performed in concert with San Jose Jazz including the 2015 Summer Fest, the South Bay Guitar Society and other Bay Area concert programs.

Razavi began studying jazz and playing in working rock bands as a teenager before attending the Berklee College of Music to study composition and arranging. He changed directions dramatically and devoted his life to the classical guitar for several years, culminating in numerous solo recitals and an album of original classical guitar music. Razavi has since focused on the electric guitar and writing for his jazz ensembles. Though first and foremost a jazz guitarist/composer, his diverse background has led him to a number of musical settings ranging from classical recitals to show bands to accompanying concert choirs, jazz singers and pop artists.

An avid educator, Razavi teaches jazz history at De Anza College and jazz guitar for West Valley College and Mission College while also maintaining a busy private teaching studio. He has conducted clinics for San Jose State University, South Bay Guitar Society, and the Vancouver Classic Guitar Society. Razavi holds holds a M.A. in Jazz Studies from San Jose State University and a B.M. from the Berklee College of Music where he studied jazz composition and majored in Contemporary Writing and Production. He has studied in private lessons or masterclasses with Mimi Fox, John Stowell, Tuck Andress, Corey Christiansen, Henry Johnson, Jason Vieaux, John Damien, and Rick Vandivier among others.