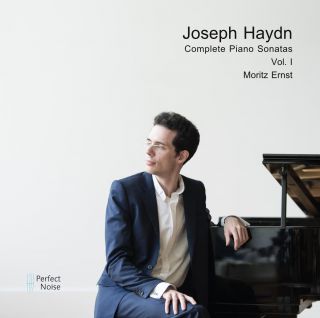 Joseph Haydn, one of the most influential composers in classical music is famous for his symphonies and his chamber music. His piano sonatas are in our daily concert life only some little pieces to start the evening with.

That´s why there are only very few complete recordings of all the sonatas in their original form.

We think it is about time to correct that, to produce a new complete recording of these wonderful pieces that were a massive inspiration for Mozart, Beethoven an many others.

It will take us 6 years to complete this edition with 11 CDs.

Moritz Ernst was born in1986 in Ostwestfalen, Germany and began playing the piano already at the age of five, taking lessons in Detmold. After graduating from high school at the early age of 16, he continued his piano studies in 2002 at the Detmolder Musikhochschule where he also studied musicology. During that time he was also awarded several prizes.

In 2003 he became a private student of the well known professor for piano, Peter Feuchtwanger. Shortly thereafter his concert activities were launched with regular performances in Europe and abroad.

Some years later Moritz Ernst continued his piano studies with Prof Jean-Jacques Dünki and harpsichord with Prof Jörg-Andreas Bötticher at the Schola Cantorum in Basel, Switzerland, thereafter his career also as harpsichordist began. Moritz Ernst is presently concertising as pianist, harpsichordist and chamber musician performing a wide range of repertoire from baroque to contemporary music. Concerts include appearences in Germany, at the Piano Festival Feuchtwangen, the Lake Constance Festival, the Beethoven Festival Bonn; in England, France, Italy, Austria, Sweden, Romania, Belgium, Netherlands, Luxembourg, Switzerland and Russia. (St. Petersburg Sound Ways Festival) He has also held master classes at the Musikhochschule in Stuttgart, Germany and at The Royal Music Academy in Malmö, Sweden.

Music of the 20th and 21st century is especially dear to his heart. Ernst has premiered several works as well as collaborating closely with composers such as Eötvös, Pelzel, Winkler, Bhagwati, Wohlhauser, Olofsson, Maros and others, some of whom have dedicated works to him.

The international press has highly acclaimed Moritz Ernst for his superb recording of music by Sir Malcolm Arnold. “The Classical Music Magazine” granted him their highest rating. “Gramophone” praised his sparkling and stimulating rendition of this recording. In addition, he has performed for international radio stations such as DRS2 (Zurich), Radio Luxembourg, SR (Radio of the Saarland), DeutschlandRadio Kultur, Deutschlandfunk and BBC London.

Extensive plans for future recording projects include: the harpsichord works of Kent Olofsson, well as the complete Sonatas by Joseph Haydn and the entire piano works by Arthur Lourié.

In 2014 the Piano Concerto by Victor Ullmann was recorded together with the Dortmund Philharmonic under Gabriel Feltz.

In June 2013 Moritz Ernst gave his debut performance with the Symphony Orchestra of Bern .

In 2014, his highly acclaimed Asian debut took place.In 2016 a 3-CD-Box with the complete piano works by Arthur Lourié will be published by Capriccio, as well as other recordings, including the Viktor Ullmann piano concerto (again Capriccio) and Vol.1 of the complete Haydn piano sonatas.

His knowledge as musicologist has led to a cooperation with the Schott Verlag.