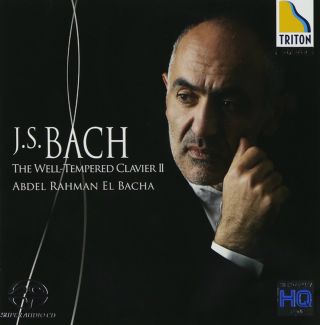 Catalog number: OVCT 00111
Releasedate: 02-06-17
- Second and final volume in Bach's Well Tempered Clavier
Pianist Abdel Raman El Bacha has a strong following in his native Lebanon, his adopted France, and apparently in Japan, where he has made several recordings for the audiophile-oriented Octavia label. His artistry relies on subtle layerings and graceful turns of direction rather than on sheer power, and the Super Audio medium definitely showcases him at his best. This is true even in Bach's Well-Tempered Clavier, Book 2, which is not usually given wide dynamic range. El Bacha has specialized in Romantic repertoire, and his Bach is definitely of the old school, with liberal use of the pedals, a range of pianistic articulation, and swelling climaxes in the music.

France-based Lebanese pianist Abdel Rahman El Bacha is among the leading Classical pianists to have emerged from the Middle East in the latter decades of the 20th century. His technique is astounding and his repertory vast, encompassing the complete concerto cycles of Beethoven, Prokofiev, and Bartók; all the solo works of Chopin and Ravel; the 32 sonatas of Beethoven; and vast chunks of the outputs of Mozart and Schumann. El Bacha has recorded extensively for various labels, including Forlane, Fuga Libera, and Naxos.

El Bacha was born in Beirut in 1958. His father was a successful composer and his mother a singer, despite her inability to read music. By the age of six El Bacha could play the piano and at nine he began serious keyboard studies with Marguerite Long pupil Zvart Sarkassian. The following year he appeared in his first concert with an orchestra performing the Bach D minor Concerto.

At 13 he gave his first recital, at the American University of Beirut recital hall, before an audience that included embassy officials from France, Great Britain, and the Soviet Union. As a result of its great success, he was offered scholarships to study in each of those three countries, and the young pianist chose France. There, at the Paris Conservatory, he studied under Pierre Sancan, from 1974.

El Bacha won a string of prizes in competitions in the coming years, but his greatest victory came in June 1978 when he won first prize at the Queen Elizabeth Competition in Belgium. He made his first recording in 1981, Early Works of Prokofiev, on the Forlane label, which was released the following year. For this premiere effort, the pianist received the 1983 Grand Prix of the Academie Charles Cros; the composer's widow, Lina Prokofiev, presented the award.

El Bacha steadily built his career throughout the 1980s and 1990s, appearing in major concert venues (Salzburg, Amsterdam, Berlin, Paris, Munich, and throughout Russia, Japan, and the Americas) and making numerous recordings. In March 2002 in Nantes, France, El Bacha stunned his admirers when he gave 16 concerts over a six-day period performing all the solo works of Chopin. Among El Bacha' later recordings was a 2005 set of the five Prokofiev piano concertos on the Fuga Libera label. The performances are unusual since they were derived from a pair of live concerts from September 2004. Later recordings included 2011's Bach's Well-Tempered Clavier, Book 1.