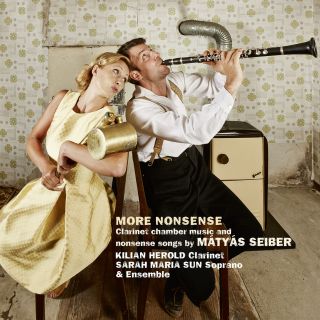 - Máyátas Seiber was a composer with Hungarian background, highly respected choir director and composition professor  with an international network of contacts

- This CD features several works where Seiber shone the musical spotlight on the clarinet and/or on the human voice.

Sources of inspiration in the chamber music
We already start to uncover a wide range of interpretations and perspectives when we attempt to summarize the life of composer Mátyás Seiber, for he is not easy to pin down. Was he a Hungarian composer of the early 20th-century Budapest school? A music entertainer on an ocean liner in the 1920s? Was he the first jazz professor in music history, with a chair in Frankfurt? Or was he more of a British artist – since in London, during and after the war, he also worked as a highly respected choir director and composition professor with an international network of contacts?

Mátyás Seiber was all of those. His music, especially his chamber music, displays that same great variety, sometimes in crazy, witty mixtures. This CD features several works where Seiber shone the musical spotlight on the clarinet and/or on the human voice.

We encounter something even more unexpected and daring in the combination of clarinet and voice in the Three Morgenstern Songs (1929), with texts just as “wacky” as the other ones on this CD. A knee wanders alone through the world: someone first had to come up with such a crazy idea, and Christian Morgenstern was known to have a vast, occasionally bizarre imagination. In Mátyás Seiber’s setting we can picture the knee dressed up in clarinet tones, bouncing around the soprano as she sings. In Morgenstern’s “Gallows Songs”, a collection of poems published in 1905, certain texts graphically fall apart on the page: at one point, the words disappear down a funnel (Trichter). How can one set such a text to music? Seiber’s answer: through movement. The graphic textual image of a funnel becomes a film soundtrack where the voice, the clarinet and the text spiral headlong into the funnel and fall out the other end.
Perhaps half a century had to pass for a new generation of open-minded musicians to unearth and rediscover all the humor, feeling and energy that this music still holds in store for us, with its fearless self-assurance and its healthy disregard for limitations of genre or national borders. Many of these pieces are thus recorded here as world premières. Seiber’s attitude was well ahead of its time and remains up-to-date, as necessary as ever. More nonsense, please! (Excerpt from the line notes by Lydia Jeschke)

Young Freiburg clarinet professor Killian studied with François Benda in Berlin, with John Yeh and Larry Combs in Chicago, and with Johannes Peitz in Hannover; he was awarded scholarships by the Cusanuswerk and the German Music Council.

In 2004, at the age of 23, Kilian Herold became a member and shareholder of the orchestra Deutsche Kammerphilharmonie (Bremen), conducted by Paavo Järvi. From 2011 to 2016 he played Principal Clarinet in the Baden-Baden SWR Radio Symphony Orchestra. Kilian Herold is frequently invited to perform as soloist with renowned orchestras such as the Berlin Philharmonic, the Bavarian Radio Symphony Orchestra (Munich), the WDR Radio Symphony Orchestra (Cologne), and the Dresden Staatskapelle. In recent years he has collaborated with conductors of the likes of Paavo Järvi, Daniel Harding, Trevor Pinnock, François-Xavier Roth, Christoph Eschenbach, Herbert Blomstedt and David Zinman. Kilian Herold can also be heard frequently in chamber music recitals: he has performed at Rheingau Music Festival, Schleswig-Holstein Music Festival, the Baden-Baden International Brahms Festival, and in a great number of further recitals in Europe, India, South America, China and Japan.

He has recorded several CDs with the labels Avi-Music (featuring Brahms and his contemporaries) and Coviello. In 2016, Kilian Herold was appointed to teach clarinet at Freiburg Musikhochschule: he thereby became the youngest clarinet professor in Germany. In 2017 he was also named Artistic Director of the Staufen International Clarinet Festival.