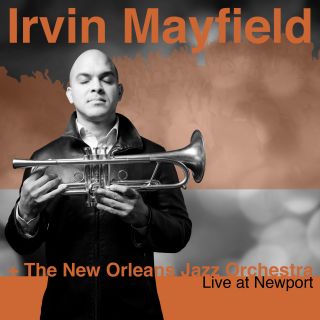 - With his latest record, Grammy and Billboard Award winning Irvin Mayfield joins the ranks of Miles Davis, Nina Simone, Ray Charles and Led Zeppelin. The latest in a recording career of more than 30 live and studio albums

- Together with the New Orleans Jazz Orchestra

With his latest record, Grammy and Billboard Award winning Irvin Mayfield joins the ranks of Miles Davis, Nina Simone, Ray Charles and Led Zeppelin. The latest in a recording career of more than 30 live and studio albums, Live at Newport gives the listener an opportunity to hear Mayfield and the nineteen musicians of The New Orleans Jazz Orchestra fresh, raw, and uncut.

Live at Newport contrasts the intimate sound of Mayfield’s previous release, New Orleans Jazz Playhouse (2015, Basin Street Records), a 300 page coffee table book including seven nights worth of live performances recorded at his Bourbon street jazz club in New Orleans and featuring a small selection of members of the New Orleans Jazz Orchestra, by highlighting the full Jazz Orchestra in front of a massive crowd. But even in front of a large crowd, Mayfield finds a way to make the performance personal. Underscoring Live at Newport is the maturity Mayfield has achieved as a bandleader and trumpeter engaged in a decades-long career. This maturity is highlighted in moments when Mayfield speaks on the need for prison reform in his introduction to his original composition named for the infamous Louisiana prison, “Angola,” or in sharing the painful memory of his father’s death in the aftermath of Hurricane Katrina and the renewed meaning he finds in the tribute “May His Soul Rest In Peace.”

Mayfield’s evolution as a musician and bandleader are more subtly evident in his Ellington-esque willingness to step back and highlight the talents of his orchestra members, such as Ashlin Parker’s extensive and brilliant solo on “Angola,” or “Sweetbread on the Levees,” an entire track dedicated to Dr. Ed “Sweetbread” Petersen and featuring his impassioned saxophone playing. Mayfield’s talents are further articulated in the complex arrangement of “The Elder Negro Speaks,” which features several intricate transitions and sections reminiscent of one of Mayfield’s greatest influences, Jelly Roll Morton.

Mayfield and Co. are in their element tackling standards such as the funky New Orleans Mardi Gras tune “Indians” and “I’ve Got The World On A String” featuring the easy, soulful vocal stylings of one of Mayfield’s many protégés, Leon “Kid Chocolate” Brown.

The New Orleans Jazz Orchestra never fails to please crowds, and in recent years they’ve accomplished this with several performances highlighting the music of famous rock and pop artists such as Nirvana, Stevie Wonder, Queen, The Beatles, The Grateful Dead, and Led Zeppelin. They included three contrasting examples of these works with the Lennon/McCartney ballad classic, “Yesterday,” an ardent rendition of Stevie Wonder’s “Overjoyed” with the oft-featured vocals of trombonist, Michael Watson, and they close out the set with a bombastic version of Queen’s “We Will Rock You.”

Live at Newport takes a well-rehearsed Jazz Orchestra, a veteran trumpeter/bandleader, and brings you through a world of jazz experiences from well-known standards, heavily orchestrated traditional New Orleans-style jazz, and jazzified rock and pop. It’s a live experience entertaining to all and is not one to be missed.