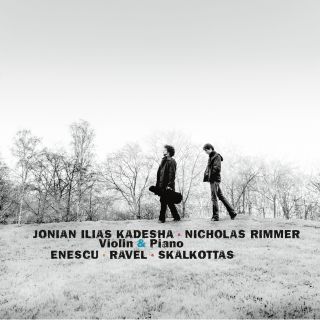 - Ravel, Enescu and Skalkottas are born almost at the same time, but in different European regions

It would be wrong to classify Nikos Skalkottas as a National Romantic composer. However, only certain works such as the Greek Dances for orchestra or the Two Little Suites for violin and piano have kept his name from falling into oblivion. The Two Little Suites reflect a shift in his last creative years: while maintaining typically strict structural control, Skalkottas was nevertheless evolving toward a less complex style......

George Enescu was Romania’s true musical ambassador. He belonged to the first generation of composers born in the relatively young Kingdom of Romania, but left his native land as a seven-year-old child prodigy to study in Vienna, then in Paris: from then on, he led a cosmopolitan life. He would soon become a world-famed celebrity: first as a violinist, soon also as a composer, pianist and conductor. Yehudi Menuhin, his most renowned pupil, referred to Enescu as the most extraordinary human being he ever encountered. Several recordings of Enescu playing the violin have been preserved, including his own Third Violin Sonata with Dinu Lipatti, his godchild, as a sensitive accompanist on the piano......

Begun before the Tzigane but only completed thereafter, the Violin Sonata in G Major was dedicated by Ravel to the above-mentioned Hélène Jourdan-Morhange, a violinist who was both his friend and advisor. In the meantime she had contracted rheumatism in her fingers and could no longer play the sonata in public. None other than George Enescu stepped in to ensure the work’s resounding success in its world première with Ravel at the piano. (Excerpts from the line notes by Johannes Jansen)

JONIAN ILIAS KADESHA, born in Athens in 1992, the Albanian-Greek violinist Jonian Ilias Kadesha is regarded as one of the most gifted and versatile musicians of his generation, both as soloist and chamber musician, praised for his individuality, intensity and fresh approach to the score. Jonian studied violin with Grigori Zhislin in Germany and with Salvatore Accardo in Italy; he also studied chamber music with Hatto Beyerle in Hannover and at the ECMA (European Chamber Music Academy). Invited to perform at well-known festivals such as Progetto Martha Argerich, Lockenhaus Festival, Kronberg ''Chamber Music Connects the World'', Boswiler Sommer, Mantua Chamber Music Festival, Mecklenburg-Vorpommern Festspiele, Hitzacker Festival, Ludwigsburger Festspiele and Heidelberger Frühling. www.jonianiliaskadesha.net

Born in the UK, Nicholas Rimmer studied piano at the Hochschule für Musik in Hannover with Professor Christopher Oakden, and musicology at Cambridge University. He rounded off his training in chamber music with lessons from Wolfram Rieger and the Alban Berg Quartet.
Rimmer was a winner of the ARD German Music Competition on two occasions: in 2006 in a chamber music duo, and in 2010 as a member of the Leibniz Trio. He won the Parkhouse Award in tandem with Nils Mönkemeyer in 2009.

Rimmer has been invited to perform at the festivals of Schleswig-Holstein, Mecklenburg-Vorpommern, Aldeburgh, Schwetzingen, Ludwigsburg, Lucerne, and Lockenhaus. He has made appearances in renowned music venues such as Wigmore Hall, the Gasteig in Munich, the Tonhalle in Zürich, and the Philharmonie in Berlin. He has performed as soloist with the NDR Radio Symphony Orchestra, the Hamburger Symphoniker and the Neue Lausitzer Philharmonie.

His releases include three successful albums with violist Nils Mönkemeyer and two solo CDs; further- more, his complete recording of the violin works of Wolfgang Rihm with violinist Tianwa Yang for Naxos was awarded the Diapason d’Or, the Pizzicato Supersonic Award and the label ‘Outstanding’ in the International Record Review.

Rimmer is a permanent member of ensembles such as the Trio Gaspard, as well as the Belli-Fischer- Rimmer Trio – a unique, experimental combination of trombone, Percussion and piano. Further chamber music partners include Maximilian Hornung, Nils Mönkemeyer, Lena Neudauer, Gabriel Schwabe and Tianwa Yang. Rimmer is also much in demand as a vocal accompanist: he is a co-founder of the innovative ‘Klangwerk Lied’ series of song recitals which take place in Freiburg. He collaborates on a regular basis with some of the most remarkable members of the new generation of young vocalists, including Ronan Collett, Simon Bode, Sylvia Schwartz, Anna Lucia Richter, and Katharina Persicke. www.nicholasrimmer.com