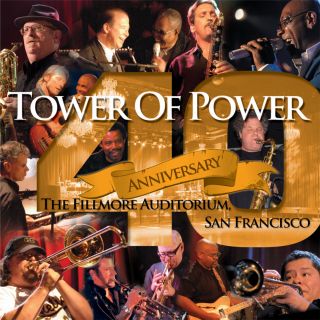 This CD DVD set was recorded live at Tower of Power’s 40th anniversary concert at The Fillmore Auditorium in San Francisco. Special bonus footage includes interviews with over 30 present and past TOP band members, plus behind-the-scenes clips filmed in and around the San Francisco Bay Area.
Tower's musical odyssey actually began in 1968 when Emilio Castillo met Stephen "Doc" Kupka in July of that year. When Doc auditioned during a band rehearsal at Emilio's house, Emilio's father called him into the kitchen and offered the following advice: "Hire that guy, he's got something." Doc and his signature baritone sax sound were now in the band, and on August 13, 1968, Tower of Power, as we know them today, began playing gigs, and soon became very well known in the area.