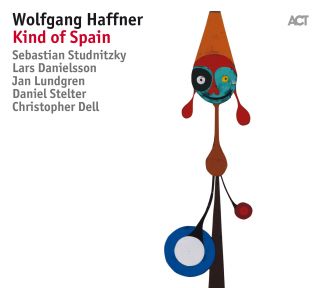 The “Sound of Europe”, captured and documented on CD and vinyl. For ACT, promoting jazz with a strong bias towards specific countries and regions of Europe has always been an important part of the mission. Whereas Wolfgang Haffner’s album “Kind of Cool” made excursions into 50s cool jazz and bop, he now immerses himself in the music of the Iberian peninsula. Traditional Spanish music meets jazz. A cultural heritage which is more than 500 years old encounters the blue notes of the New World; flamenco and folklore meet new compositions by the bandleader. The vibe created by this sextet is introvert, warm and atmospheric, and the listener’s mind might easily drift off… to a roof terrace somewhere in Granada by night, perhaps.

Vibes player Christopher Dell, like pianist Jan Lundgren, was also on the album “Kind of Cool”. He gives this work a particularly individual coloration. Lars Danielsson has been a key player in Haffner’s team right from the start - their close musical relationship goes back many years. The same is also true for Sebastian Studnitzky who contributes his soft, velvety trumpet sound. And then there is the youngest member of this team: guitarist Daniel Stelter. “That melody is so strong that the softer you play it, the stronger it gets”, said Miles Davis of Joaquín Rodrigo’s “Concierto de Aranjuez”, which he recorded for his 1960 album “Sketches of Spain”. Here Daniel Stelter plays the unforgettable tune – very much in the idiom of the trumpet legend. He demonstrates tremendous concentration and also tenderness.

“Space in music is essential to me”, says Haffner. “Just a few notes, played in ballad tempo, that really appeals to me”. Understatement is the order of the day on “Kind of Spain”, with no one adding a note more than is necessary, and a bandleader whose drumming never has a scintilla of attentionseeking about it. “I like strong melodies and beautiful harmonies”, Haffner emphasizes. “The very last thing I think about is how I am going to accompany the songs on the drums.” Both “Tàpies” and “Salinas”, composed in Haffner’s adoptive home, Ibiza, show evidence of his elegant restraint. The traditional Andalusian 16th century piece “El Vito”, and Lars Danielsson’s exciting “Pasodoble”, which is reminiscent of Spanish folk dance, are both invigorating popular songs. On these tracks Dell and Lundgren both shine with fine solos. So who knew? Spanish music... played by German and Swedish jazz musicians. Who would have guessed that so much Mediterranean passion and sensitivity can exist north of the Alps? And the answer is: everyone who knows Wolfgang Haffner.

Born in 1965, Wolfgang Haffner’s career started early: he was just 18 when Albert Mangelsdorff, selected him as a member of his band. Today, Haffner is without a doubt the most renowned German drummer in the world. Not only has he played with the cream of the jazz musicians in his homeland - across the generations, from Mangelsdorff to Till Brönner, from Klaus Doldinger to Michael Wollny - he also is one of the very few German players who has had widespread international success. American icons like Michael and Randy Brecker, Pat Metheny or John Abercrombie, as well as Scandinavian heroes such as Nils Landgren or Lars Danielsson, all put their trust in his unmistakable pace and his inspiring creativity. And because of his highly dynamic playing Haffner is also one of the most indemand accompanists for pop-acts like Chaka Khan, “Die Fantastischen Vier” or even Nightmares On Wax. Like many of the best in his profession, Haffner was never satisfied with just playing the drums, and he soon began to compose and produce, setting off on own projects early in his career. With his four highly acclaimed ACT releases to date, he is also at the forefront of German jazz as a bandleader.