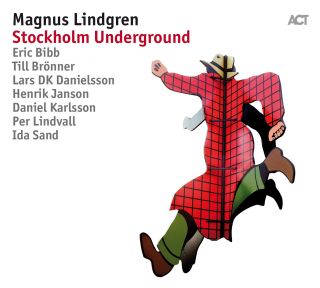 Catalog number: ACT 98462
Releasedate: 08-09-17
- This is a Swedish version of the legendary “Memphis Boys”, the studio band at American Sound Studio.

- The key figure in this project is evidently Magnus Lindgren, a stalwart of the Stockholm jazz scene and probably the best jazz flautist in Europe.

A re-connection with a musical icon or tradition - it is often the way something new, maybe even game-changing emerges. That was the idea in curator/ producer’s Siggi Loch’s mind when he suggested to Magnus Lindgren that he might look at re-tracing the footsteps of Herbie Mann. “Stockholm Underground” is a homage to the one of the greats of the jazz flute, and to his legendary 1969 album “Memphis Underground”, listed by Rolling Stone in 2013 in the “100 Best Jazz Albums” of all time.

The laid-back “sweet soul music” of Herbie Mann (1930 - 2003), has been brought into the present day. Mann’s rhythm n’ blues-imbued jazz was also underscored with latin, inspired by Mann’s trips to Brazil. And the fact that this tribute has come from Stockholm is no accident: alongside Paris and Copenhagen, the city was a place of refuge for American jazz and blues musicians in the 60s. Their presence continues to influence Swedish jazz, not least the players in the rhythm section on “Stockholm Underground”. With Henrik Janson on guitar, Lars Larry Danielsson on electric bass and Per Lindvall on drums, the original rhythm section of Nils Landgren’s Funk Unit – which became well known in Scandinavia and beyond – has been re-assembled. Already in the mid-90s, these musicians had proved that it is not only American musicians who can give authentic groove and soul – Europeans can do it, and also develop it further. They are joined on keyboards by Daniel Karlsson whose melodic and harmonic command are masterful. This is a Swedish version of the legendary “Memphis Boys”, the studio band at American Sound Studio. Through their presence on hits by Elvis Presley, Aretha Franklin, Neil Diamond, Dionne Warwick, Wilson Pickett – and indeed on Mann’s “ Memphis Underground” – they played their way into music history.

The key figure in this project is evidently Magnus Lindgren, a stalwart of the Stockholm jazz scene and probably the best jazz flautist in Europe. Whether emulating the soft melodic lines, the breathy tone, or indeed other Herbie Mann hallmarks such as singing-whileplaying and multiphonics, Lindgren is a complete shoo-in. “Stockholm Underground” is not just a doff of the cap to one of the most successful jazz musicians of the 70’s. This tribute to Herbie Mann is always on the money. Mann’s variety of Memphis soul-jazz lives on in this new contemporary take – refreshed with Swedish cool.

Magnus Lindgren is a multi-talented creator of music. His ability to express himself on the tenorsax, clarinet or flute wears the sign of a real master. However, he is also able to explore interesting music on several other instruments. Multi is a good expression of this gifted person. As a composer he has a great potential to fulfil his own creative impulses. He dresses them in a melodical costume,  optimal for the stylish frame that is proper for the moment.

Last but certainly not least; the obvious masterclass in the musically versatile arsenal of Magnus Lindgren is his brilliant emotion for arranging music. The greatness lies in the way he puts together the sublime samples of notes, the sound colours, the rhythm figures, the harmony sequences.

All this in a truly organic way; no risk for overdoing. The final result brings  a sence of  dewfresh contemporary statement. If you on top of this add the natural gifted Magnus Lindgren´s ability to accommodate the subtle quality from a large range of musical genres; then the comparison with the musical titan Quincy Jones is obvious.

Therefore, it´s not surprising that Quincy is the mentor who Magnus admires the most, along with giants as Miles Davis and Herbie Hancock. In Magnus way of looking at it, those three legends have had the guts to always look further into the universal world of music, even though they already had proven their greatness.

In the same manner Magnus works all the time to extend his musical frames, no matter if he deals with small jazz combos, big bands, choirs with instrumental soloist, intergration between classical orchestra and jazz group, swedish folklore, heavy funk rhythms, brazilian samba or african traditional music. Structures and genres are always given new dimensions, a certain amount of risks are included and the joy to participate is offered to everyone who has the opportunity to experience his enchanting efforts.

When Magnus Lindgren receives well earned honours for his various musicianship he responds with deep confession that his own thoughts on this matter truly is that he has just begun! He claims very prompt  that music can vary a lot; the main thing is that it always must be worked out with a solid personality and total honesty.

In his early days, Magnus listened to big band jazz created by Buddy Rich; the melody  was Mercy, Mercy, Mercy. With his own words; he was overwhelmed. The first LP he bought was the Michael Jackson album Thriller. It catched him totally. The fact that Quincy Jones had created the intensive dynamic and spectacular varied background for the legendary popicon was a logical summary for the taste of Magnus Lindgren.

All music must come from the bottom of your soul, according to Magnus Lindgren. Therefore, it´s logic that his cd-project from autumn 2013 is called Souls. In a furtile collaboration with the american bassplayer and producer Ira Coleman, Magnus has put together a nice couple of newly written originals. The disc with a certain club feeling and to some degree with old school technology was recorded in New York. The production Souls contents a spectacular group of international musicians, together with vocal artists with star glance. For example the Swedish singers Rigmor Gustafsson, Marie Fredriksson (from Roxette) and Anna Christoffersson. Souls can be considered as a manifest from Magnus Lindgren for his ability to make music with a broad musically spectrum, together with an open hearted attitude.

In Magnus Lindgren´s way of looking at it, the improvisational moment is the centre of the musical universe. The established jazz quartet offers generous possibilities to spread a creative flow. Magnus is steadily returning to that kind of chamber musicial cooperation. He proved it again in the cd-production Four, released 2012. The result gave lots of acclaimed media respons and also a Swedish Grammy nomination. The album Four consists of the world renowned bassplayer Palle Danielsson, the astonishing drummer Jonas Holgersson and Daniel Karlsson respectively Anke Helfrich, two pianoplayers with the ability to give a good back up with sublime expressions. The music is merely Magnus´ own compositions, completed with a colourful version of Michel Jackson´s I Just Can´t Stop Loving You.