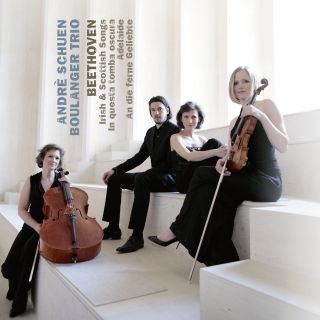 - Andrè Schuen is the raising star on the voice heaven

“WHAT SWEET, SECRET BLISS!”
Art song had blossomed into a multifaceted genre by 1800, and the debate whether to favour recurrent stanza structures or through-composed form was well underway. Lieder, as the lyrical genre per se, marked out the territory in which musicians could express the most profound emotions. The best composers therefore increasingly chose to through-compose their songs – a logical step, thanks to which they were able to closely follow the content and the speech of the poems they were setting to music. Beethoven already took that very step in his earliest Lieder. The emotional value of a song such as Adelaide op. 46 (1795/96) even managed to convince a late-19th-century Vienna music critic otherwise well known for his harshness – Eduard Hanslick, who wrote in 1886: “No depiction of a youth’s enthusiastic love could be more faithful and exemplary than this Adelaide by Beethoven. What sweet, secret bliss shivers in every note of this golden melody! Perhaps the young man is not even ‘blushingly following her footsteps’ like Schiller’s suitor [in The Song of the Bell ]. Instead, this lover seems to be content to inebriate himself with his beloved’s mere name, to which he renders such profuse homage.”

Beethoven originally called his setting of Matthisson’s poem a “cantata”, and Adelaide introduced a theme that would play a major role in the composer’s subsequent Lieder output: his yearning for the unattainable. No other work conveys that same subject more impressively than the one Beethoven wrote in 1816: To the Distant Beloved, op. 98, a setting of a “romantic-pastoral text” (Maynard Solomon, 1977) by Alois Jeitteles, and the first truly through-composed song cycle in music history. The songs in this cycle cannot be singled out for individual performance, since they are connected by transitions in the piano accompaniment. Schubert never took up the same idea, but it served all the more so as a model for Robert Schumann and for subsequent generations of Lied composers. Beethoven would later apply the same cyclic concept, displayed in such exemplary fashion in To the Distant Beloved, in several of his late chamber music works...

His contribution can be described as new arrangements and harmonizations of pre-existing melodies. These were true “songs without words”, since considerations of language could not be taken into account. Beethoven’s correspondence with Thomson shows, however, that he was quite pleased with this modus operandi (although the Irish Songs WoO 152-154, conversely, did allow for a closer association between text and music).

ANDRÈ SCHUEN Baritone
Born in the Ladin town of La Val (South Tyrol, Italy), the Andrè Schuen studied voice at Salzburg Mozarteum under Prof. Horiana Branisteanu, as well as Lied and oratorio under Prof. Wolfgang Holzmair. In 2009 Andrè Schuen won First Prize at the Walter und Charlotte Hamel Foundation Song Competition. In 2010 he obtained his diploma in opera, song and oratorio at the Mozarteum with distinction, and was awarded the Hanna Ludwig Prize and the Lilli Lehmann Medal. Schuen has made guest appearances with renowned orchestras including the Vienna Philharmonic, the Berlin Philharmonic, and the Orchestre de Paris, under conductors such as Simon Rattle, Riccardo Muti, Ivor Bolton, Nikolaus Harnoncourt, René Jacobs, Jukka-Pekka Saraste, Daniel Harding, Thomas Hengelbrock, Trevor Pinnock, Philippe Herreweghe, Ingo Metzmacher, Alberto Zedda, and Theodor Currentzis. Concerts, festivals and television appearances have led him to perform at Salzburg Festival (since 2006), in Vienna, London, Berlin, Munich, Zurich, Tokyo, Puebla (Mexico), Buenos Aires, and Perm (Russia). From 2010 to 2014, Andrè Schuen was a member of the ensemble of Graz Opera, where he covered a great number of roles including Ford (Falstaff), Papageno (Magic Flute), and the title role in Millöcker’s operetta Gasparone. He also gave a number of highly successful performances in Mozart operas at the Theater and der Wien (Vienna) as Figaro, Don Giovanni and Guglielmo, and was thereafter awarded the ORF Austrian Music Theater Audience Prize. Schuen has been collaborating for several years with pianist Daniel Heide: his Lied repertoire now includes Schubert’s Winterreise, Schumann’s Dichterliebe, and Liederkreis op. 24. Released in 2015 on the CAvi-music label, their début CD with works by Schumann, Hugo Wolf and Frank Martin won the coveted German Echo Klassik Prize.

Apart from the Lied genre, Andrè Schuen is also much in demand in the field of oratorio. In addition to a great number of masses and cantatas, he has sung in J. S. Bach’s Christmas Oratorio, St John Passion, St Matthew Passion, and Mass in B minor, Haydn’s Creation, Handel’s Messiah, Mozart’s Requiem, Brahms’s A German Requiem, Mendelssohn’s Elijah, Fauré’s Requiem, and Britten’s War Requiem.

The Boulanger Trio
The German newspaper Die Welt described a performance of the Boulanger Trio as irresistible, while Wolfgang Rihm wrote in a letter: To be interpreted in this way is surely the great dream of every composer. Founded in Hamburg in 2006 by Karla Haltenwanger (piano), Birgit Erz (violin) and Ilona Kindt (cello), the ensemble is now one of the few full-time piano trios currently based in Berlin. Already in 2007 they won the 4th Trondheim International Chamber Music Competition in Norway, followed by the Rauhe Prize for New Chamber Music in 2008. The ensemble has received crucial musical guidance from Hatto Beyerle, Menahem Pressler, and Alfred Brendel.

In the past years, the trio has gained an excellent reputation in the world of chamber music, with regular appearances at the Heidelberger Frühling, Schleswig-Holstein Music Festival, the Sommerliche Musiktage Hitzacker, the Dialogs at Salzburg Mozarteum, and Ultraschall in Berlin. In tandem with chamber music partners such as Nils Mönkemeyer (viola), Sebastian Manz (clarinet) and Andrè Schuen (baritone), the trio has performed at prestigious venues such as the Festspielhaus in Baden-Baden, Palais des Beaux-Arts in Brussels, Wigmore Hall in London and the Philharmonie and the Konzerthaus in Berlin.

In addition to works of the Classical and Romantic periods, the three musicians are much in demand as performers of new music. The Boulanger Trio collaborates with composers such as Wolfgang Rihm, Johannes Maria Staud, Friedrich Cerha, Toshio Hosokawa, and Matthias Pintscher. In 2012, the trio launched its own concert series, the Boulangerie, in Hamburg and Berlin, and starting with this season it is also being exported to the Musikverein in Vienna. At every one of these concerts, a classical composition is performed alongside a piece of contemporary music, the composer of which is always present and talks with the three musicians about his or her oeuvre.

In 2016, the Boulanger Trio added two new recordings on the CAvi-music label to its discography: Solitaires, and a portrait CD celebrating the 90th birthday of Austrian composer Friedrich Cerha, after five previous releases on the Ars and Hänssler Profil labels that featured works by composers such as Shostakovich, Vasks, Liszt, and Schoenberg.