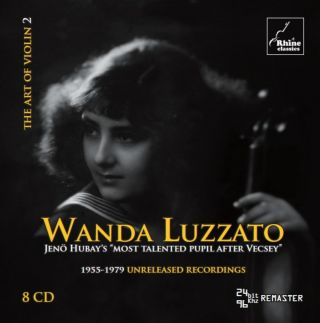 The Art of Violin 2

- The whole Luzzato recorded legacy presented here has been duly restored and remastered for a better listening experience.


MusicWeb: «Valuable recorded documents from the Wanda Luzzato Archive. - I would encourage all violin afficionados to explore this compelling collection. I’m most impressed by Rhine Classics presentation. Everything about this production spells quality. [...] Luzzato commands a formidable technique. Her tone is sweet and pure and comes over as silvery in some recordings. Her vibrato is on the fast side, and her coloristic range isn’t as varied as the likes of say Menuhin, Heifetz or Perlman. Intonation is for the most part pristine. She seems to be greatly influenced by Heifetz in her use of expressive slides and position changes. Emilio Pessina's expert restorations and remasterings are to be commended.»

Wanda Luzzato was born on 6 March 1919, in Varese but her family was from Milan. She received her early music training from Ariodante Coggi (in Varese), who in the following years will be the mentor also of a young Uto Ughi.

Her mother, born Elsa Curti, was a singer - but never performed on the opera stage - married to a career officer, Angelo Vitali who left her as a war widow at only 28. She later remarried and changed her previous surname Vitali to Luzzato Carpi.

Wanda began playing the violin when she was about 3, and gave her first concert at 5. She was admitted to the Conservatory at a very young age and graduated when she was 12, thus becoming the youngest graduate of Alberto Poltronieri and apparently of all Italian Conservatories.