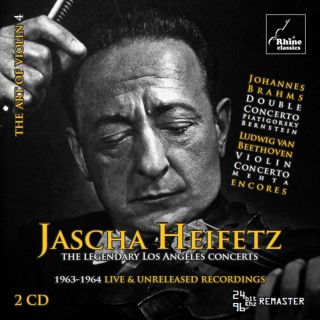 The Art of Violin 4


MusicWeb: «This is a valuable addition to the discography. - The Los Angeles concerts of 1963-1964 were given at the Hollywood Bowl, in which Heifetz and Piatigorsky played the Brahms Double with Leonard Bernstein, and at the Dorothy Chandler Pavilion where the violinist essayed the Beethoven with Zubin Mehta. Neither concert has apparently been issued before. There are two bonus tracks, previously released, that come from the Bell Telephone Hour with Donald Voorhees conducting in Radio City, New York in February 1950. The Dvořák is tightly coiled, cloaked and hooded, full of inimitable tonal splendour and not remotely relaxed, whilst the Sarasate Habanera is suave and bewitching. Cembal d’amour once issued this (CD-113) but their transfer is cloudy and palpably inferior to this one.»

Jascha Heifetz, widely regarded as one of the greatest performing artists of all time, was born in Vilnius, Lithuania, which was then occupied by Russia, on 2 February 1901. He began playing the violin at the age of two. He took his first lessons from his father Ruvin, and entered the local music school in Vilna at the age of five where he studied with Ilya Malkin. He made his first public appearance in a student recital there in December 1906, and made his formal public debut at the age of eight in the nearby city of Kaunas (then known as Kovno, Lithuania). With only brief sabbaticals, he performed in public for the next 65 years, establishing an unparalleled standard to which violinists around the world still aspire.

Heifetz entered the St. Petersburg Conservatory in 1910. He studied first with I.R. Nalbandian, and then entered the class of Leopold Auer in 1911. By then his public performances were already creating a sensation. One outdoor concert in Odessa in the summer of 1911 reportedly drew as many as 8,000 people. The young Nathan Milstein, who was in the audience, recalled that the police surrounded the boy when he finished playing to protect him from the surging crowd.