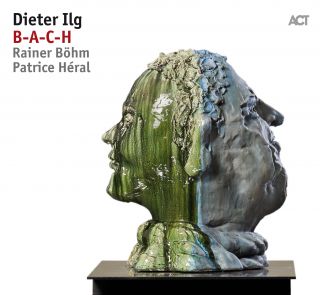 
“You can‘t play jazz without also playing Bach”, saxophonist Joshua Redman once observed. And Dieter Ilg shares this opinion of the founding father of Western classical music: “For the musician, his presence is inescapable. The preludes from the “Klavierbüchlein for Wilhelm Friedemann Bach” were the very first things I learnt to play, and they never leave you.” Bach may well be the “beginning and end of all music” (Max Reger), but Ilg‘s intense involvement in his music has been late in coming. “Perhaps it’s because I enjoy putting the cart before the horse”, he quips. After Verdi‘s “Otello”, Wagner‘s “Parsifal” and “Mein Beethoven”, the bassist now takes his inspiration from 12 works – through which he rediscovers his B-A-C-H.

Ilg developed a fondness for Pablo Casals‘ playing of the Bach solo cello suites, and also “for a while” for Glenn Gould’s recording of the Goldberg Variations. “Sometimes the mathematical genius side of Bach can be a turn-off; it was the case for me,” he admits. So how does one approach the great master‘s mighty oeuvre. It‘s quite simple; to quote Bach himself: “All you have to do [in music] is to touch the correct key at the right moment.” The points where Ilg as a jazz musician felt most at one with Bach was at the cusp where the compositions themselves suggest variation and improvisation. “The purity and the sense of construction in Bach‘s music are clearest to me when I depart from well-trodden paths and trust my own methods”, he says. In B-A-C-H, what is surprising and also totally convincing is the way the music hovers and luxuriates in the beauty of Bach’s melodies, how a musical story can suddenly appear out of a ‘pure’ structure. The boundaries between improvisation and composition evaporate, vanish and re-appear. “The way these arrangements emerged felt very natural and flowed so well.” And Ilg the wine connoisseur adds playfully: “just like the hint of slate in very fine riesling – it can be a real discovery.” While studying Bach, the pieces which seemed too jump out at him were the Harpsichord Concerto BWV 1052 and the “Sarabande”, “simply ideal to make a song from”, says Ilg.

The delicate tracery of Patrice Héral’s drumming seems to find its way of its own accord, whereas Ilg and pianist Rainer Böhm – either solo or in unison, but always as equals – address the harmonic and rhythmic forms and spontaneously make something new and different from them.

Beethoven once said that Bach‘s work has such depth and infinite possibilities, he should really not be called “Bach” (the German for a stream) at all, but “Meer” (the sea). In Ilg’s hands Bach is full of significance – and yet completely approachable.

Jazz and classic – Dieter Ilg (born 1961) knows both worlds. Although he decided to become a jazz bassist at the tender age of 16, he studied classical double bass; partly to gain a comprehensive knowledge of music history. Since then he has combined these two musical worlds with each other in various projects. With his technical mastery, Ilg lends the double bass a lyrical quality and expressiveness that are the reason for his international renown. Whether as a side man or as a leader of his own ensembles – Dieter Ilg has a rare talent to unite the art of accompaniment with the art of playing solo.