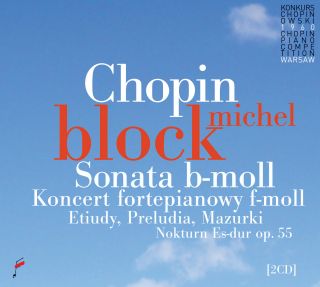 
During the 6th International Fryderyk Chopin Piano Competition, which was held around the turn of March 1960 in Warsaw, Michel Block belonged to the Mexican ‘team’, although today in all reliable sources he is referred to as a Belgian. He was born on 12 June 1937 in Antwerp. Some time after the birth of their son, his French parents moved to Mexico, where the future pianist’s paternal grandfather had been living since 1870. It was there that he began to learn piano, and when his talent proved markedly above the average, his parents decided to move to New York. At the famous Juilliard School of Music, the development of the teenage Michel’s talent was overseen by Beveridge Webster (1908–1999; a pupil of Artur Schnabel and Nadia Boulanger), an esteemed American teacher and sought-after pianist, to whom the leading American composers willingly entrusted the first performances of their new works.

Following his appearance in the 6th Chopin Competition, in which Michel Block reached the final, he embarked on an international career, consolidated in 1962 with first prize in the then prestigious (now defunct) Leventritt Competition for pianists and violinists held in New York, which was also won by musicians of the calibre of Eugene Istomin, Alexis Weissenberg, Gary Graffman, Van Cliburn and Malcolm Frager. Above all, however, the Belgian virtuoso gained a lofty position thanks to his recitals in prestigious music centres and performances with famous philharmonic orchestras, including from Amsterdam, Berlin, Chicago and New York, during which Block worked with such conductors as Carl Maria Giulini, Bernard Haitink, Riccardo Muti and Georg Solti. Michel Block, now numbered among the most outstanding pianists of the second half of the twentieth century, owed his reputation also to his numerous disc recordings for Deutsche Grammophon, EMI (and its ‘offshoot’ Pathé Marconi), Pro Piano Records and Guild.

Even if he had tried to plan one himself, pianist Michel Block couldn't have given his career a better or more dramatic start than the one he received in 1960. As an entrant in that year's Frederic Chopin International Competition, he failed to capture the top prize. What he did capture, however, was the attention and allegiance of one of the jurors, Artur Rubinstein. The acclaimed Polish-American pianist created the Rubinstein Prize then and there for Block, a dramatic gesture that said plainly and loudly that he believed Block should have been the winner.

Block went on to win the Leventritt Award in 1962. He has performed with a number of top orchestras, including the London Philharmonic, the New York Philharmonic, the Berlin Philharmonic, and the Chicago Symphony Orchestra. His recordings have been released by ProPiano, Pathé Marconi, EMI, and Deutsche Grammophon. He has recorded music by Albéniz, Rachmaninov, Schumann, Chopin, Granados, and Scriabin.

The pianist was born in Belgium and moved to Mexico with his family. He took up the piano during his years in Mexico and studied at the Juilliard School in New York. Block spent 20 years as an instructor at Indiana University, beginning in 1978. His public performances have become rare events.