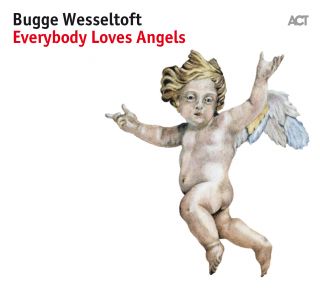 - Available as CD and Vinyl

There can be very few musicians who are capable of making silence as audibly vivid as the Norwegian Bugge Wesseltoft, in particular in his solo piano recordings. For twenty years, the most successful of these, “It’s Snowing On My Piano”, has been treasured as a haven of wintry stillness and contemplation. It is a classic album. Listeners all over Europe have responded to it by giving it a permanent place in their lives. So now Bugge Wesseltoft and producer Siggi Loch have returned to the original concept of “Snowing” in “Everybody Loves Angels”. The title is a metaphor for the kind of weightless ease which the music conveys; and this time it's not just for winter...
Bugge Wesseltoft is a man who likes to push the envelope and he is well-known as one of the most innovative jazz pianists today. His collaborations with DJs like Henrik Schwarz and his experiments with electronic music have made him a name far beyond the contemporary jazz scene. At the beginning of the 90s Wesseltoft – surrounded by musicians like Nils Petter Molvær and Eivind Aarset – started out in Norway's progressive jazz scene to become one of the leading figures in a radical new approach to jazz. Since then he has continuously weaved elements of house, techno, ambient and noise into jazz and some free improvisations for his project "New Conceptions of Jazz". But for all that, Wesseltoft's lyrical and melodious playing was always very tangible. In working for ACT he essentially became famous for this facet of his artistic personality: The 1997 solo Christmas album "It's Snowing On My Piano" presents him in a very intimate acoustic setting. In 2012 the release of the sequel to this very special work "Last Spring" continued. In collaboration with classical violinist Henning Kraggerud, Wesseltoft once again returns to Norwegian lore, but this time adapts classical compositions – for example by Edvard Grieg – to create an album of minimalistic meditations.