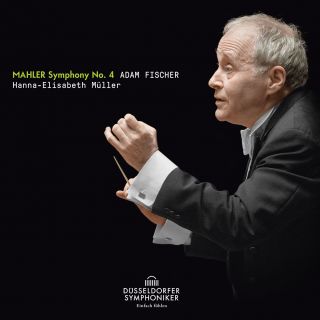 “I am delighted to perform and record the complete symphonies of Gustav Mahler with the Düsseldorfer Symphoniker. The result, we hope, should be something special: a rendition that stems from an active collaboration in which we mutually inspire one another. This should not be “my” Mahler, but “our” Mahler……..

The Fourth is Mahler’s most transparent and lyrical symphony – almost a chamber symphony. Probably also due to its rather reduced format, it has been received in unique and contradictory ways. Even during the time when international audiences had practically no knowledge of Mahler’s music, the Fourth remained relatively popular. Today it is regarded as less impressive than the First, Second, Third, Fifth and Sixth Symphonies; from my point of view, however, this stems from an unacceptable misunderstanding. Stylistically, the Fourth poses a truly special challenge I find quite exciting. It is Mahler’s “Pastoral Symphony”.

The musical style of the Vienna Secession movement tended to integrate elements of Viennese musical tradition into purely classical works. Many listeners did not take that tendency seriously and branded it as harking back to overbaked ideas (I overheard statements to this effect when I was a child). Of all Mahler’s symphonies, the Fourth is perhaps the one where he puts those Viennese elements most clearly on display. I once even heard the cruel remark that Mahler’s Fourth Symphony amounted to nothing else than the expression of his sadness for not being Schubert. Frankly, this music is everything else but a Schubert imitation. Much of Schubert – and of Haydn – admittedly does resurface here, along with typical Viennese effects including a particular kind of glissando, for instance, and those stylistic means are one of the Fourth’s essential elements. We should therefore perform them in a way that makes them quite noticeable. (from his remarks in the booklet)

Hanna-Elisabeth Müller studied under Rudolf Piernay at Mannheim University of Music and Performing Arts, and still works just as closely with him now as she did before successfully passing her soloist exams. She later fine-tuned her skills in masterclasses held by Dietrich Fischer-Dieskau, Julia Varady,

Elly Ameling and Thomas Hampson. Since her recital debut at the Heidelberger Frühling in 2011, Hanna-Elisabeth Müller has often performed with Juliane Ruf, her piano accompanist, in major venues including the Cologne Philharmonie, De Singel in Antwerp, and the Rheinvokal Festival.
Hanna-Elisabeth Müller had her international breakthrough at the Salzburg Easter Festival in 2014 with a sensational debut as Zdenka alongside Renée Fleming and Thomas Hampson in Richard Strauss’s Arabella conducted by Christian Thielemann and, shortly afterwards, was named Young Artist of the Year by Opernwelt magazine. After early guest appearances including Pamina at Rome’s Teatro dell’Opera, Hanna-Elisabeth Müller joined the ensemble of Bavarian State Opera in 2012/2013, where she was heard in many different roles, including Pamina (The Magic Flute), Zerlina (Don
Giovanni), Susanna (Le nozze di Figaro), Servilia (Titus), Marzelline (Fidelio), Gretel (Hänsel und Gretel), the Infanta Donna Clara in Zemlinsky’s The Dwarf, and Sophie in Massenet’s Werther.

In 2017, Hanna-Elisabeth Müller performed two important debuts. At the New York City Metropolitan Opera she sang Marzelline (Fidelio), and made her first appearance at the Scala in Milan, singing Donna Anna in a new production of Don Giovanni. Previously, at the 2016 Munich Opera Festival, she bid farewell to the ensemble of Bavarian State Opera with an acclaimed performance of Sophie in Der Rosenkavalier. Hanna-Elisabeth Müller’s versatility ensures that the young soprano is a regular guest on the recital and concert stage. Her concert repertoire ranges from Haydn’s Creation to Mahler’s Symphony No. 4 and Beethoven’s Missa solemnis.

At the beginning of the 2015/16 season, Adam Fischer was appointed Principal Conductor of the Düsseldorfer Symphoniker and Artistic Consultant of the Düsseldorf Tonhalle. He is also Honorary Conductor of the Austrian-Hungarian Haydn Orchestra, founder of the Eisenstadt Haydn Festival, and
founder and director of the Wagner Festival in Budapest. Well-known for his courageous political commitment, Adam Fischer has spoken out often in favor of human rights. Together with András Schiff he initiated and signed a petition against racism and discrimination, which they submitted to the European Union.

Born in 1949 in Budapest, Adam Fischer studied composition and conducting in the Hungarian capital, and with professor Hans Swarowsky in Vienna.
After appointments as Kapellmeister in Helsinki, in Karlsruhe and at Munich State Opera, Fischer held the post of General Music Director successively at the opera houses of Freiburg, Kassel and Mannheim, and was also Music Director of Hungarian State Opera in Budapest. Since 1999 he has
been Chief Conductor of the Danish National Chamber Orchestra in Copenhagen. Regular engagements have led Adam Fischer to perform in the great opera houses of Europe and the US, including Vienna, Milan, Munich, Covent Garden, the New York Met and Bayreuth Festival. In orchestra appearances he also conducts the Vienna Philharmonic, the Vienna Symphony, the Munich Philharmonic, the Orchestre de Paris, the London Philharmonic (LPO), the Orchestra of the Age of Enlightenment, the Chicago and Boston Symphonies and the NHK Symphony in Tokyo.

Fischer’s award-winning CD releases include the complete symphonic works of Haydn (distinguished with the German national prize “Echo Klassik”) as well as of Mozart. He has also been awarded the Grand Prix du Disque twice: for his recordings of Die Königin von Saba (Goldmark) and of Bluebeard’s Castle (Bartók). In 2017, Adam Fischer was named Honorary Member of Vienna State Opera.

“An orchestra for Düsseldorf”: that is the objective and the high standard that the Düsseldorfer Symphoniker set for themselves – 250 times a year. This orchestra has an uncommon profile, since it performs not only in the Tonhalle, but also for the Deutsche Oper am Rhein in Düsseldorf and in
Duisburg. On its regular tours to Holland, Austria, China and Japan, the orchestra carries Düsseldorf’s reputation as a city of culture out into the world.

Already in the 1700’s, internationally celebrated artists such as Handel and Corelli collaborated on occasion with the “Düsseldorf Court Orchestra” until the court was dissolved. A century later, in 1818, orchestral culture was re-introduced into Düsseldorf when the Municipal Music Society (Städtischer Musikverein) was founded, attracting celebrated musicians of the likes of Mendelssohn and Schumann to serve as conductors. The orchestra became truly “municipal” in 1864, and after Aachen it is thus the second oldest civic orchestra in Germany. Throughout the following decades it became one of the leading and largest orchestras in the country. Its conductors in the postwar era have been Heinrich Hollreiser, Eugen Szenkar, Jean Martinon, Rafael Frühbeck de Burgos, Henryk Czyz, Willem van Otterloo, Bernhard Klee, David Shallon, Salvador Mas Conde, John Fiore and Andrey Boreyko. Starting in the 2015 season, Adam Fischer has taken up the post of Principal Conductor. The orchestra went on tour to Spain in 2011, guested at the Beethoven Easter Festival in Warsaw in 2012, and enjoyed resounding success in Moscow that same year. In 2014, the Düsseldorfer Symphoniker gave a superb début performance at the Musikverein in Vienna, and were likewise well-received at the Concertgebouw in Amsterdam. In May 2015 they made nine acclaimed appearances in Tokyo.