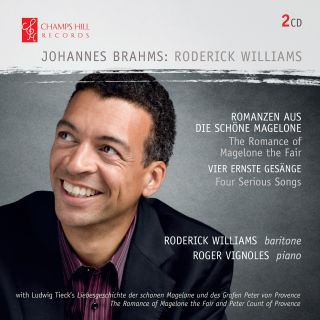 - Roderick Williams was the winner of the 2016 RPS Singer award, is the Artistic Director of Leeds Lieder and in demand around the world as a recitalist, in opera and with orchestras

Either I am a sucker for late-Romantic song or perhaps for histrionic fairytales of derring-do and blushing maidens, but I for one was enthralled by Brahms’s ‘Die schöne Magelone’ on first hearing. It was presented in such a way as to grip the audience from the outset: a narrator set the scene and linked the songs, all of this in an exciting, modern English précis, while the songs themselves were performed in German by a range of young singers and pianists, each one encapsulating the heightened emotion of each piece. I left the recital with the sort of heart-pounding best described by the likes of Berlioz.

When the opportunity came for me to learn these songs, I relished the chance, finding along the way that Brahms’s glorious, sweeping vocal lines really suited my voice. I revelled in the ardour of emotion in Tieck’s lyrics, channelling my inner Romantic adolescent. Pianist Roger Vignoles enlisted the wonderful Julia Somerville to narrate between the songs using Roger’s own reduction of Tieck’s story and the three of us, like troubadours of old, presented this epic fairytale in concerts around the country.

It is easy for us sophisticates in the twenty-first century to treat such material with a certain hauteur, or even ridicule. But what I noticed in concert, especially as Julia’s narration unfolded, giving me a chance slyly to observe the audience, is that people were very quickly spellbound by the tale. All of us, I observed, love to be told a story.

I am hugely grateful to Champs Hill for allowing me the privilege of recording these songs and the Vier Ernste Gesänge. When the sessions were all but finished, I begged for the indulgence of those present and asked to record Roger’s English narration, pretty much on a whim. I hoped it might help persuade some audiences, perhaps unfamiliar with these songs and especially out of their context, that this really is a most terrific and enchanting work. I hoped it might connect with the wide-eyed child in us all, anyone who cannot resist “Once upon a time...”.

Roderick Williams encompasses a wide repertoire, from baroque to contemporary music – on the concert platform, in the opera house, and in recital.

Roderick began his international singing career as a choral scholar in the choir of Magdalen College, Oxford, where he read Music. He trained in opera at the Guildhall School of Music and Drama (which recently appointed him as a Fellow). He has since sung concert repertoire with all the BBC orchestras and with many other orchestras and choirs in the United Kingdom, throughout the continent of Europe and as far afield as San Francisco, Rio de Janeiro, Kuala Lumpur, Melbourne and Tokyo. His many festival appearances include the BBC Proms (most notably the Last Night in 2014), Edinburgh, Cheltenham, Aldeburgh – and the Three Choirs Festival, whose Association invited him to become their President in 2016, in succession to Dame Felicity Lott.

He enjoys relationships with the major UK opera houses, and was especially associated with the baritone roles of Mozart – The Count in The Marriage of Figaro being his particular favourite. In 2016 he sang the title-rôle in Tchaikovsky’s Eugene Onegin and, later in the same year, in Britten’s Billy Budd. He enjoys the challenge of modern music and has sung world premieres of operas by, among others, Michel van der Aa and Sally Beamish.

He is an accomplished recital artist, popular at venues and festivals including London’s Wigmore Hall and Kings Place, and at the Oxford Lieder Festival. His recitals have frequently been broadcast on BBC Radio 3. He is known for his interpretation of English song, which is well represented in an extensive discography now numbering more than seventy entries. In 2016 he was the choice for the Royal Philharmonic Society’s Singer Award.

Roderick Williams is also a composer with a growing international reputation in the field of choral writing and song. In 2016 he won the Choral Award of the British Academy of Songwriters, Composers & Authors for his composition, Ave Verum Corpus Re-imagined.