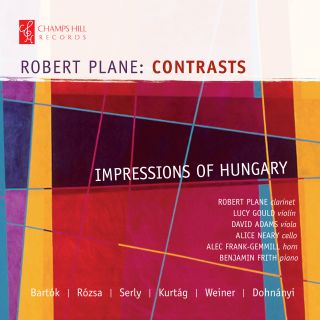 - Includes the world premiere recording of a piece by Tibor Serly, better known as the completer of Bartok’s Viola Concerto.


We are so used to the gritty and astringent style of Béla Bartók (1881–1945) that it is often overlooked that he started from a musical and aesthetic background very similar to that of his apparent polar opposite, the precociously gifted but ’’ conventional Erno Dohnányi (1877–1960). Indeed, the two attended the same Catholic grammar school in Pozsony (now Bratislava in Slovakia), Dohnányi just four years ahead of Bartók, and both pupils played the organ at the church attached to the school. Bartók was very conscious of the early and spectacular success enjoyed by Dohnányi, whose piano quintet, written while still a student at the Budapest Academy of Music, so impressed Brahms that the German composer helped arrange for its premiere in Vienna; after graduating, Dohnányi became almost instantly an international success, performing Beethoven’s Fourth Piano Concerto in London’s Queen’s Hall under the baton of Hans Richter. Bartók hoped to emulate this success, and while in his teens composed several Brahms- influenced works including a piano quintet written just two years after Dohnányi’s. He also greatly admired Dohnányi’s piano playing, and took lessons with him; their relationship was sufficiently cordial for Dohnányi to conduct several of Bartók’s early works.

Robert Plane won the Royal OverSeas League Music Competition in 1992. Since then his solo and chamber career has taken him to prestigious venues across Europe and beyond, performing Mozart’s Clarinet Concerto in Madrid’s Auditorio Nacional de Música with the City of London Sinfonia, on tour in the USA with the Virginia Symphony and throughout China with the BBC National Orchestra of Wales, during which his performance at Beijing’s National Centre for the Performing Arts was broadcast live to a TV audience of six million.

Robert has become particularly known for his performances and recordings of the magnificent English repertoire for clarinet. Gramophone magazine has praised playing of ‘ravishing lyricism and conviction by Robert Plane, who has now surely fully occupied the shoes of the late Thea King in his
championship of British clarinet music.’ His benchmark recording of Finzi’s Clarinet Concerto (BBC Radio 3 Building a Library recommendation and part of the Naxos British Music Series which won a Gramophone Award in 1999) is still a regular feature of the playlists of both Radio 3 and Classic FM nearly twenty years after its initial release. He subsequently recorded discs of music by Bax (a further Gramophone Award shortlisting), John Ireland, Howells, Alwyn, Holbrooke, Robin Milford and Stanford, including Stanford’s Clarinet Concerto with the Bournemouth Symphony Orchestra.

Robert made his solo debut at the BBC Proms in 2011 in Simon Holt’s double concerto ‘Centauromachy’. He gave the world premiere of Piers Hellawell’s ‘Agricolas’, with subsequent performances and a CD recording for Delphian with the Ulster Orchestra and the RTÉ National Symphony Orchestra. Other notable premieres include the clarinet concerto by Diana Burrell, with performances with Royal Northern Sinfonia at the Huddersfield Contemporary Festival and at the Barbican, and Nicola LeFanu’s Concertino. He gave the UK premiere of Christian Jost’s ‘Heart of Darkness’ before taking it to the Dortmund Philharmonic during their season celebrating that composer’s works. Other overseas engagements include Finzi in the Zurich Tonhalle with the Zurich Chamber Orchestra, Copland with the Malta Philharmonic in Valletta and a gala performance of the Bruch Double Concerto for clarinet and viola with the Symphony Orchestra of Sri Lanka as part of the Commonwealth Heads of Government Meeting.