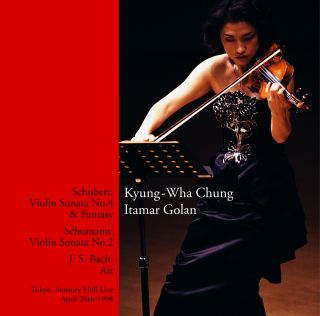 Catalog number: KKC 4009
Releasedate: 06-10-17
- Kyung Wha Chung in recital in Tokyo, Suntory Hall, 1998.
- Schubert and Schumann Sonatas with Itamar Golan at the piano.
The great Korean violinist Kyung Wha Chung, who recently returned to the stage after several years spent fra from concert halls for health problems, is here captured at the apex of her career in a concert where she plays German Romantic masterpieces accompanied by Itamar Golan.

Kyung Wha Chung is recognised throughout the world as one of the finest violinists of her generation.  A prolific recording artist, her dazzling and probing artistry has made her a much-acclaimed performer throughout her forty-year career.  Lauded for her passion, her musicality, and the intense excitement that she brings to her performances, Chung’s uniquely expressive interpretations of the violin literature have established her as an artist of the very highest stature.  Born in South Korea, Chung first heard the violin at the age of six.  Instantly mesmerised by its tone, she was swiftly recognised as a child prodigy, making her concert debut aged nine with the Seoul Philharmonic Orchestra, performing the Mendelssohn Violin Concerto.  At thirteen, Chung enrolled at The Juilliard School, New York, and began studying with renowned pedagogue Ivan Galamian, and later with Joseph Szigeti.

Upon winning the prestigious Edgar Leventritt Competition in 1967, Chung was immediately engaged by major American orchestras – including the Chicago Symphony Orchestra and the New York Philharmonic – and also performed at the exclusive White House Gala.  She made her sensational European debut in 1970, performing the Tchaikovsky Violin Concerto with Sir André Previn and the London Symphony Orchestra, at London’s Royal Festival Hall.  This concert was met with great critical acclaim and public attention, and – as a result – Chung received offers of concerts throughout the United Kingdom.  Subsequently obtaining an exclusive recording contract with Decca/London, Chung’s debut album – of the Tchaikovsky and Sibelius concertos with Sir André Previn and the London Symphony Orchestra – brought her to international attention, and she continued to perform with the world’s greatest orchestras (including the Berlin Philharmonic, Vienna Philharmonic, London Philharmonic and Boston Symphony Orchestra, among others).  Throughout her career, Kyung Wha Chung has enjoyed working alongside the world’s finest conductors, including Claudio Abbado, Daniel Barenboim, Charles Dutoit, Bernard Haitink, Riccardo Muti, Sir André Previn, Sir Simon Rattle, Sir Georg Solti and Klaus Tennstedt.  Her chamber music partnerships have included high calibre pianists such as Peter Frankl, Kevin Kenner, Stephen Kovacevich, Radu Lupu, and Krystian Zimerman.