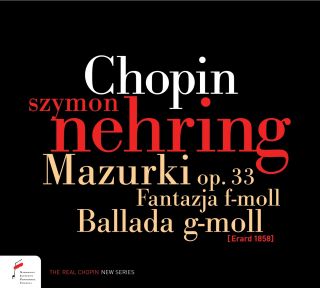 Catalog number: NIFCCD 048
Releasedate: 09-02-18
- Szymon Nehring – the best Pole of the 17th Fryderyk Chopin International Piano Competition.
- Honored, among other awards, with the Audience Prize, a finalist from the most recent Chopin Competition
- Here for the first time, he plays on a historical piano.

This new album in The Real Chopin series is Szymon Nehring’s first studio CD recorded for The Fryderyk Chopin Institute. One of the best Polish pianists of the younger generation, winner of the Artur Rubinstein Competition in Tel Aviv (2017) and best Pole at the Chopin Competition in 2015, he has also decided to play a period instrument for the first time

at Bydgoszcz Academy of Music. From the autumn of 2017, he will be honing his skills with Boris Berman at Yale School of Music. He has performed in many countries of Europe, and also in Canada, the United States, Israel, China and South America. He has twice been a guest of the ‘Chopin and
his Europe’ festival in Warsaw. He has played with such orchestras as the Warsaw Philharmonic Orchestra, Orchestra of the Eighteenth Century, Israel Philharmonic, Santander Orchestra and Sinfonia Iuventus, under the baton
of distinguished conductors including Jacek Kaspszyk, Jerzy Maksymiuk, Grzegorz Nowak, Krzysztof Penderecki, John Axelrod and Omer Meir Wellber. His forthcoming concert plans include a tour of Japan and China, recitals at the Wigmore Hall and Carnegie Hall and further festival appearances: ‘Chopin and his Europe’, the Pablo Casals Festival in Prades, the Vilnius Piano Festival and the Beethoven Easter Festival. His debut CD featuring Polish music won

a number of prestigious awards. In 2016, three more discs were released: the Chopin concertos with Sinfonietta Cracovia conducted by Jurek Dyba∏ and Krzysztof Penderecki, the latter’s ‘Resurrection’ Piano Concerto under the composer’s baton, and the Fryderyk Chopin Institute’s release of his recordings from the 17th International Fryderyk Chopin Piano Competition in its series of ‘most interesting personalities’ from the competition.
The present disc is Nehring’s first studio recording for the Institute and his first on a period instrument. Szymon Nehring is represented by the Ludwig van Beethoven Association.