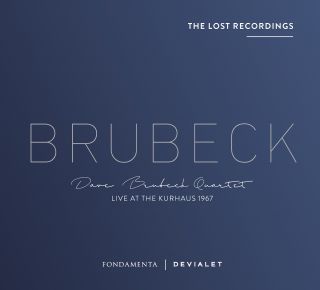 During one of their last concerts in 1967 which remained unreleased until then, the Dave Brubeck Quartet, comprising more or less the same members since its inception, had already been playing for 16 years. Naturally, they were more than well acquainted. Dave and Paul made their debut at the Black Hawk Night Club in San Francisco. Their hallmark: relentless combatting racial barriers, even in the darkest periods of McCarthyism, and making jazz accessible to the widest possible public by revisiting ballads, old favourites and well-known classical themes. But above all, they developed an almost endless variety of complex time signatures.

That evening of 24 October 1967 in Scheveningen, the Dave Brubeck Quartet was not a band playing jazz. They were the worthy ambassadors of American music in Europe.
Undoubtedly one of the most famous bands in the history of jazz, the Dave Brubeck Quartet, hugely popular throughout the 1960s, reaching levels of esteem rarely attained, has always been the subject of much controversy. Issues of all kinds, often contradictory, have been raised, opposing enlightened amateurs and newcomers to the genre, traditionalists and modernists, proponents of a cool, elegantly aloof type of jazz with fans of freer, more expressionistic music. The quartet was firmly connected with the aesthetic and political upheavals of the time. The ideological tensions at the heart of this war of taste have now subsided, but the band, even 50 years after its break-up, continues to enjoy a paradoxical reputation. The Quartet is both emblematic of the ecumenism of a so-called Golden Age of jazz and an exception which, when all is said and done, cannot be considered as fully belonging to any of the main aesthetic trends of their time; nor can the group legitimately take any pride, today, in having left any true legacy.

The Dave Brubeck Quartet was decidedly atypical in their position at the frontiers of genres and styles. Not for a moment, however, did they give the impression of being marginal or transgressive in any way. Concealing the boldness of their forms behind the accessibility of their melodies and an ever-present sense of swing, they regularly shook off the canons of classic jazz without being aggressively modern or showy. In other words, their music was both veritably wide reaching and genuinely experimental. Ultimately the Dave Brubeck Quartet defined, on their own and for themselves only, what could be termed an alternative mainstream trend, an unlikely cocktail of easy listening and formalist complexities. Our post-modernism, desperately seeking hybrid, syncretic objects, would do well to rediscover it and reclaim it.

Pianist Dave Brubeck and alto saxophonist Paul Desmond had been playing together since 1946 in an experimental octet that incorporated elements of jazz into contemporary classical compositions, with previously unheard links between the two genres. Brubeck had just completed a course with French composer Darius Milhaud, who taught at Mills College, Oakland. In 1951, Brubeck and Desmond hit on the idea of founding a quartet as classical as it could be in terms of both formation andinstruments. The contrast between their personalities and their styles was an immediate hit: Desmond’s ethereal sophisticated sound, the dream-like fluidity of his phrasing filled with abstract arabesques, his detached elegance, all lightened up Brubeck’s pianist rigor and roughness, the piano improvisations that he liked to stud with well-framed digressions hammered out in granite-like block chords and modernist harmonies.

The musicians in the rhythmic section changed constantly until drummer Joe Morello joined up in 1956, followed by bass player Eugene (Gene) Wright in 1958. Now driven by this ideal pair, the Quartet rapidly earned renown thanks to their popularity with American students. They undertook a long tour of college campuses across the country and made numerous recordings, first for Fantasy, and then, starting in 1954, for Columbia. Their repertoire combined a choice of standards, polished original compositions (Jazz Goes to College, 1954), film music (Dave Digs Disney, 1957) and traditional popular tunes that immediately won listeners over (Gone with the Wind, 1959). The band gradually expanded their range of sources, all the while consolidating the keystone of their singular universe, reassuring in its unambiguous allusions to jazz in terms of both their instrumentarium and swing as well as in their improvisation. They continued to be decidedly progressive, with an open-armed approach to unusual time signatures and rhythms, from classical western music to manifold influences from African and Eastern music. In 1959, the worldwide success of the Time Out album, assimilating highly sophisticated and innovative time signatures into their jazz, consolidated the exceptional popularity of a band that had already become a legend.

Triumphant world tours, unfailingly successful albums – the quartet sailed effortlessly through the 1960s, despite the numerous musical revolutions of the decade. Late in 1967, however, Brubeck and Desmond to decided to call an end to their musical partnership after a final European tour. And it was at that particular time in the band’s history that this concert – recorded but never released – took place on 24 October 1967 in the historical setting of the prestigious Kurhaus Hotel in Scheveningen, a seaside resort on the North Sea in the Netherlands. Among the countless live recordings that illustrate the history of the band, only one, until now, The Last Time We Saw Paris, made in the French capital on 13 November of the same year, gives a glimpse of their final performances. The Dutch concert, recorded only a few weeks earlier, is a invaluable foil to the Parisian show. The band’s essential big hits all feature here (Brubeck’s ‘Three to Get Ready’ and Desmond’s ‘Take Five’ from the Time Out album, and Brubeck’s ‘Forty Days’ from the Time In album) as well as more naïve, charming folk songs like the famous one composed by Stephen Foster in 1851, ‘Swanee River’, so evocative of the South, extracts from one of the Quartet’s albums, Bravo Brubeck, brought out a few months earlier by Columbia, and two sentimental yet fresh South American songs, ‘La Paloma Azul’ and ‘Cielito Lindo’. The Quartet gives a performance that is full of vigour. There is not an iota of lassitude, not a hint of monotony to indicate that the group would  soon split.

In versions of the songs that are often intense and condensed, the quartet displays the quintessence of its genius, playing more than ever on rich contrasts between the intertwining evolutions and force of the rhythm section, tighter than ever, the abrupt and atonal piano that combined sentimentality and abstraction, and the dreamlike, lyrical flights of Desmond’s alto saxophone, ever more elliptic and sensual.

Until the very last moments of their existence, the Dave Brubeck Quartet met the objectives they had set themselves, playing with generosity and talent. They won over their public with their ingenious synthesis that was never expedient, never compromised, never lapsed into mediocrity. These tracks, miraculously saved from oblivion, are now here to bear witness.