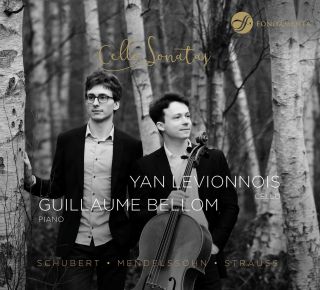 Catalog number: FON 1702026
Releasedate: 06-10-17
- This album is entirely dedicated to the German romantic repertoire
- Both of these musicians were named at the Victoires de la Musique in France in the "Instrumental Revelation" category

Yan Levionnois made a name for himself with his very first album, Cello Sollo, released by Fondamenta in 2013, garnering the prestigious “ffff” label awarded by Télérama magazine. This was followed by Pierrots Lunaires, with violinist Mélanie Clapiès, also brought out by Fondamenta.

Guillaume Bellom has taken an unconventional path, training as both a pianist and a violinist, and was also awarded Télérama magazine’s esteemed “ffff” label for an album dedicated to  Schubert in 2013. In 2017 he was nominated in the Instrumental Revelation category at the French Victoires de la Musique.

Schubert is honoured with a performance of his Sonata for Arpeggione and Piano. Don’t try looking out for an arpeggione – only about a dozen of these instruments have survived to the present day. It was a hybrid of a guitar and cello, played with a bow, but which never gained popularity. The eponymous sonata, on the other hand, is still considered as one of Schuber’s major works.

Mendelssohn composed the Sonata Number 2 for Cello and Piano in 1843, almost 20 years after Schubert’s composition. Mendelssohn made an early start: at the age of 12, he composed an opera, and his famous octet was written when he was 16. This sonata is classical in both its form and musical inspiration, a real gem. Mendelssohn was not only a great composer, but he also revived the music of J.S. Bach.

Yan Levionnois obtained the first prize at the André Navarra and In Memoriam Rostropovitch international competitions, and was awarded two special prizes at the last Rostropovitch Competition, including that for the most remarkable personality. He is the Adami 2013 classical revelation, and the prize winner of the Banque Populaire and Safran Foundations. He has given solo performances with the London Philharmonic Orchestra, the Sinfonia Varsovia, the Orchestre National de France and the Orchestre National du Capitole de Toulouse under conductors such as Daniele Gatti, Dimitry Sitkovetsky, Jacek Kaspszyk, Jean-Jacques Kantorow, Heinrich Schiff and Arie Van Beek.

His first solo cd, “Cello Solo”, was released in February 2013 for Fondamenta, and obtained the prestigious ffff of Télérama magazine. His discography also includes a recording of Rachmaninov's second Elegiac Trio with Renaud Capuçon and Denis Kozhukhin, in the “Martha Argerich and Friends” festival, for EMI classics, as well as “Pierrots Lunaires”, a violin and cello duets cd with violinist Mélanie Clapiès, released in 2014 for Fondamenta.

Passionate about Arthur Rimbaud’s poetry, he created Illuminations, a music and poetry show, in which he is both cellist and narrator.