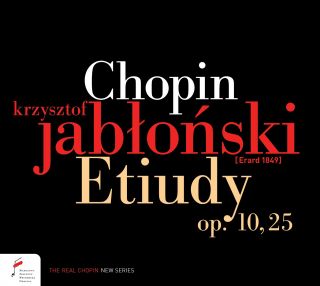 Catalog number: NIFCCD 047
Releasedate: 08-12-17
- Jablonski faces the two collections of Etudes on a period piano after his recording of the same repertoire on a modern one (NIFCCD 215)

The complete Etudes of Fryderyk Chopin in the rendition of one of Poland’s most superb pianists – on a period instrument.

After the Etudes op. 10 and 25 in the interpretation of Krzysztof Jabłoński on a contemporary piano (disc NIFCCD 215, released in the White Series in 2016), we now present to you the Etudes in the rendition of this pianist, but on a piano from Chopin’s era. Each disc is an example of superb piano playing; together, aside from their artistic value, they are also of exceptional research value, as they provide the chance to directly compare sonic and interpretative differences in specific pieces.

One specific feature of Chopin’s œuvre is a peculiar synthesising of different genres. Some etudes, for example, display characteristics of a nocturne (the E major and E-flat minor from op. 10 and the C-sharp minor from op. 25), scherzo (the G-flat major from op. 10, which according to Anton Rubinstein is a kind of ‘refined joke’, and the E minor from op. 25) or an impromptu (also the G-flat major from op. 10). Chopin’s etudes have been called ‘immortal’ works (Ignacy F. Dobrzyński). For Hugo Leichtentritt, they were ‘a succession of felicitous discoveries of the capacities of the piano’; for Vladimir Jankelevitch, ‘a microcosm, a miracle’; and for Mieczysław Tomaszewski, ‘the revelation of new horizons in the domain of piano playing […].

also the Gold Medal at the Arthur Rubinstein International Piano Master Competition in Tel Aviv (1989). For more than thirty years, he has performed solo, as a chamber musician and with orchestras on stages in Europe, America, Asia and Israel. He has given recitals in the Master Concert Series at the Berliner Philharmonic. He is a frequent guest of many orchestras and has performed under the baton of Valery Gergiev, Andrzej Boreyko, Krzysztof Penderecki, Jerzy Semkow, Jerzy Maksymiuk, Frans Brüggen, Antoni Wit, Jan Krenz and Jacek Kaspszyk, and with prominent ensembles such as the Orchestra of the Eighteenth Century, Berner Symphonie-Orchester, Radio- Sinfonieorchester Stuttgart des SWR, Düsseldorfer Symphoniker, Hamburger Symphoniker, Helsinki Philharmonic, Lahti Symphony Orchestra, Tokyo Philharmonic Orchestra, Kyushu Symphony Orchestra, Warsaw Philharmonic Orchestra and Polish National Radio Symphony Orchestra in Katowice.

As a chamber music recitalist, he has performed with Tsuyoshi Tsutsumi, Konstanty Andrzej Kulka, Teng Li, Tamaki Kawakubo, Jing Zhao, Robert Diaz and Daniel Gaede, among others. He is also a member of the Warsaw Piano Quintet. Besides the best known works of the piano literature, Jab∏oƒski also plays some less popular compositions, such as concertos by Ferdinand Ries, Henry Litolff and Ernő Dohnányi. He has performed for ballet, opera and theatre, as well as for spectacular multimedia projects, such as Scriabin’s Prometheus with the Düsseldorfer Symphoniker, the ballet Fortepianissimo choreographed by Lorca Massine at the Polish National Opera in Warsaw and an original piano version of Debussy’s Pelléas et Mélisande. He performed Chopin’s works during the Wiener Opernball in Vienna.

He has also played in front of an audience of thousands with the Grant Park Orchestra and Krzysztof Urbaƒski at the Jay Pritzker Pavilion in Millennium Park, Chicago. He has recorded live for radio and television in many countries, as well as numerous CDs in Germany, Japan and Poland (including as part of the Polish National Edition of the Works of Fryderyk Chopin, edited by Jan Ekier). He studied with Janina Butor and Andrzej Jasiƒski at the
Academy of Music in Katowice, where he earned his PhD in 1997. In 2006, the President of Poland conferred on him the title of Professor. Krzysztof Jab∏oƒski regularly gives masterclasses and lectures, and he has been a juror of international piano competitions, including Chopin competitions in Warsaw, Toronto, Miami, Tokyo and Foshan, China. He is a Professor of the Fryderyk Chopin University of Music in Warsaw.