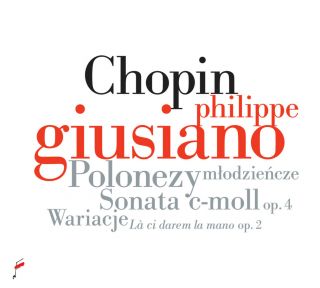 The world of Chopin's youthful output comes across as not entirely formed, yet not devoid of a peculiar charm, shaped on Classical traditions and on the influence of pre-Romantic stylistic trends, but with individual traits pointing to Chopin's waxing creative powers. That world is represented by the polonaises chosen for this recording, as well as the cyclic form of the first Sonata and the Variations on a theme of Mozart.
Whilst the early polonaises published posthumously announce certain features of Chopin's language and the Sonata in C minor documents his mastery of the principles behind the construction of a large, four-movement sonata cycle and Classical composition technique after his own fashion, the Variations, which according to scholars shows certain features of the style of Weber and Kurpinski, is one of the most mature works f Chopin's youthful output, one the brought him a Europe-wide reputation.

Philippe Giusiano, the winner of the 13th International Fryderyk Chopin Piano Competition in Warsaw in 1995 (and finalist in 1990). Born in 1973
in Marseilles, where he began to learn the piano at the age of five. He then studied at the conservatories of Marseilles and Paris, and won a scholarship which allowed him to study at Salzburg’s Mozarteum. While still a student, he won prizes in many local and international piano competitions.

His success in the Chopin Competition un Warsaw paved the way for him to perform in the world’s most prestigious concert halls, including the Carnegie Hall, the Concertgebouw, the Théâtre des Champs-Elysées, Salle Gaveau, and the Suntory Hall. He also regularly performs at major European music festivals (including ‘Chopin and his Europe’ in Warsaw), as well as touring in Germany, Japan, Austria, Poland, Italy, France, Portugal, Morocco, Denmark, Lithuania, Spain, Brazil, Argentina, Canada and the Near East, where he plays solo recitals and appears with excellent orchestras under such renowned masters of the baton as Kazimierz Kord, Yutaka Sado, Jacek Kaspszyk, Grzegorz Nowak, Krzysztof Penderecki, Antoni Wit, Philippe Entremont, and Jean- Jacques Kantorow. The focus of his discography are his critically and publicly acclaimed recordings of Chopin and Rachmaninov. The present album inaugurates Giusiano’s collaboration with the Fryderyk Chopin Institute. Philippe Giusiano is also active as an educator, mostly in Poland and Japan. Since 2008 he has been a guest lecturer at Heisei Music College in Kumamoto, Japan. In 2012 he received the Medal of Marseilles for his outstanding contributions to the cultural life of his native city.