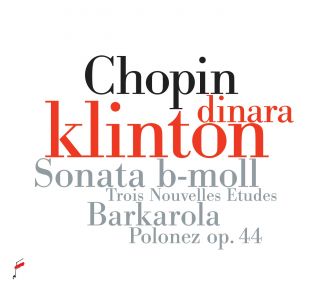 A Chopin recital comprised of: Sonata in B-flat minor op. 35 and Barcarolle in F-sharp major op. 60, as well as two Polonaises, a Nocturne and three Etudes composed for Moscheles and Fétis’ Méthode des Méthodes.

Dinara Klinton is an active concert performer, a prize-winner in over fifteen international piano competitions, including the Cleveland (2016, third prize), the BNDES in Brazil (2014), the Paderewski in Poland (2013, second prize) and the Busoni (2007, second prize). She has appeared at many prestigious festivals, including the ‘Progetto Martha Argerich’ in Lugano, the ‘Chopin and his Europe’ and Arthur Rubinstein festivals in Poland, the Rheingau Music Festival, ‘La Roque d’Anthéron’, the Cheltenham Music Festival and the Aldeburgh Proms. She has performed at such venues as the Royal Festival Hall and Wigmore Hall in London, Tchaikovsky Concert Hall in Moscow, Berlin Philharmonic, Gewandhaus zu Leipzig and Sumida Triphony Hall in Tokyo, and worked with such orchestras as the Philharmonia Orchestra, Lucerne Symphony Orchestra, St Petersburg Philharmonic Orchestra, State Academic Symphony Orchestra of Russia and ‘Musica Viva’, and with con- ductors Christian Arming, Martyn Brabbins, Alexander Dmitriev, Constantine Orbelian and Alexander Rudin, among others. She made her debut recording of Chopin and Liszt at the age of sixteen (Delos Records), with her second album featuring Liszt’s Études d’exécution transcendante, S. 139 (2016, Genuin Classics). Born in 1989, in Kharkiv, Ukraine, she started learning piano at the age of five. A year later, she entered Kharkiv Special Secondary Music School to study with Svetlana Zakharova. In the age of eight, she won first prize in two international competitions for young pianists: one in the Czech Republic and the Vladimir Krainev Piano Competition in her hometown. She gained Graduate Diploma with Honours at the Moscow State Conservatory, where she worked with Eliso Virsaladze. She has been awarded a Master of Performance degree at the Royal College of Music and has completed the Artist Diploma in Performance course, under the tutelage of Dina Parakhina.