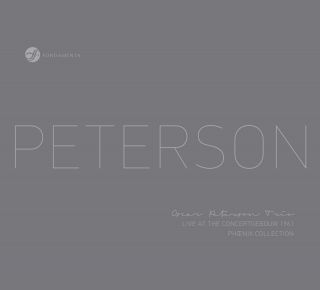 Live at The Concertgebouw 1961

10 February 1961: Norman Granz stepped on to the Concertgebouw stage to present one of the finest concerts from the Jazz at the Philharmonic series he organized. He introduced Oscar Peterson, his protégé since 1949. The pianist was always keen to play in this hall, renowned for its extraordinary acoustics, resonating with the performances of the classic musicians he so loved. Aged 35, at the pinnacle of his extraordinary technical skills and at the peak of his fame, the pianist seemed to have nothing more to prove. As the decade opened, the pianist was a byword for elegance, modesty and joyfulness.

It was at the initiative of producer and impresario Norman Granz that, for the very first time in 1952, the legendary hall of the Concertgebouw in Amsterdam opened its doors to music other than the classics. Afro-American, popular music was still too often considered “illegitimate” in the ears of many distinguished music lovers. But jazz was an immediate success, and after that the venerable institution welcomed jazz musicians to give concerts scheduled around midnight in their large hall. The Canadian pianist Oscar Peterson was, of course, one of the great stars tasked with spreading the good word of swing to Europe. Throughout the 1950s, the stars of jazz played at the Concertgebouw on many occasions. He was a lover of classical music from Bach to Rachmaninov, and an erudite one at that. It is likely that the Verve label, wanting to make the most of the legitimacy that came with performing in such a prestigious concert hall, brought out a record entitled Oscar Peterson Trio at the Concertgebouw in 1957. And although Peterson actually played in Amsterdam that year with Ray Brown and Herb Ellis, the album proved to be a fake, comprising excerpts of concerts recorded in far less prestigious halls in Chicago and Los Angeles.

Peterson, unanimously considered as a phenomenon of the keyboard who had succeeded in achieving a synthesis between the masters of classical piano jazz even as he integrated the influence of artists in transition whose status was not that easy to pin down, he won over enlightened amateurs and newcomers to jazz with his radiant, virtuoso and charmingly light music. Although everything around him was trembling on its foundations, battered by the free jazz that was emerging, Peterson’s music, serene and free of showy moodiness, embodied the permanence of a certain golden age of jazz. It seemed sheltered from the vicissitudes of time and the aesthetic upheavals prefigured by the revolutions that were taking place. Yet, even if it seemed impossible to change a style that had reached maturity and appeared entrenched in its perfection, Peterson reached a particularly creative period in his career. He had spent most of the 1950s taking the orchestral formation of piano, bass and guitar, created by Art Tatum and transformed into myth by Nat King Cole, to the pinnacle of refinement and organic cohesion. He had recently formed a particularly tightly wrought new trio, modifying considerably the orchestral dynamics in which his piano had to fit, and integrating the subtle beat of the great percussionist Ed Thigpen next to bass player Ray Brown, his faithful partner since the  early 1950s.

After two years of touring the world the trio was on top form and the quality of the sound is on a par with their music.

Oscar Peterson was one of the greatest piano players of all time. A pianist with phenomenal technique on the level of his idol, Art Tatum, Peterson's speed, dexterity, and ability to swing at any tempo were amazing. Very effective in small groups, jam sessions, and in accompanying singers, O.P. was at his absolute best when performing unaccompanied solos. His original style did not fall into any specific idiom. Like Erroll Garner and George Shearing, Peterson's distinctive playing formed during the mid- to late '40s and fell somewhere between swing and bop. Peterson was criticized through the years because he used so many notes, didn't evolve much since the 1950s, and recorded a remarkable number of albums. Perhaps it is because critics ran out of favorable adjectives to use early in his career; certainly it can be said that Peterson played 100 notes when other pianists might have used ten, but all 100 usually fit, and there is nothing wrong with showing off technique when it serves the music. As with Johnny Hodges and Thelonious Monk, to name two, Peterson spent his career growing within his style rather than making any major changes once his approach was set, certainly an acceptable way to handle one's career. Because he was Norman Granz's favorite pianist (along with Tatum) and the producer tended to record some of his artists excessively, Peterson made an incredible number of albums. Not all are essential, and a few are routine, but the great majority are quite excellent, and there are dozens of classics.