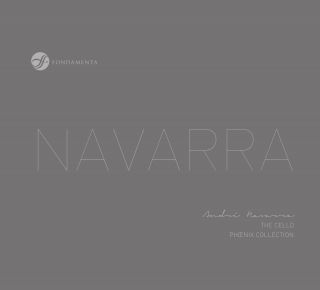 Fondamenta is launching the Phoenix Collection with a homage to André Navarra, the great cellist, on the thirtieth anniversary of his death. Accompanied by Navarra’s son, our teams travelled the length and breadth of Europe to seek out original recordings – some abandoned, others hitherto unpublished – to piece together the artistic legacy of one of the most illustrious cellists and founders of the great French tradition of cello playing.

Each and every one of the tracks has been carefully restored using the Phoenix Mastering process that we have developed over several years; one of the phases is based on the technology of Devialet. This makes for a unique collection of six CDs that bring together all the great concertos for cello with a sound never before equalled.

Devialet has always been committed to innovation. The Devialet technologies break every world record in amplification performance and exquisitely reproduce each aspect of sound to provide each listener with an exceptionally affecting experience.

Who could have foretold the destiny of André Navarra when he was born into a modest family in Toulouse on 11 November 1911. His father was a porter at the early morning market, and in the afternoon played the double bass at a café called Les Américains. His uncle Michel might have been almost clairvoyant when he chose the boy’s seventh birthday gift: a ¾ cello. The introverted child spontaneously transferred his fervour to the instrument. It was a passion that accompanied him ceaselessly until he died, surrounded by his students, in Sienna on 31 July 1988.

Awarded the first prize at the Conservatoire de Paris by unanimous decision of the jury when he was only 13, he set out living the austere life of an athlete (he was an expert boxer), refusing to be distracted from his instrument and renting a studio above a garage to practise all night without disturbing the neighbours. He was barely 20 years old when his soloist career began, taking him across Europe as he performed with the finest orchestras to play all the concertos of the repertoire. Navarra took first prize at the Vienna International Competition in 1937. But the war put a temporary obstacle in the way of his ascension. Unlike some of his fellow musicians, he refused to collaborate with the occupiers and he took refuge behind his music stand, playing as an ordinary member of the Paris Opera orchestra. From 1945 onwards, he could again be heard in the capitals of Europe, conducted by the likes of Munch, Paray and Barbirolli, and later Mehta, Ristenpart and Ančerl.

A parallel career opened up for him: teaching. He taught in Paris, Sienna, Saint-Jean-de-Luz, Nice, London, Vienna, Sion and Detmold. His mastery of the bow was unique: he borrowed the technique used by violinists. It revolutionized the method of cello playing, bringing roundedness, sensitivity and strength. He pursued his two callings with equal intensity, one career enriching the other, as this collection shows so clearly. He approached every repertory with the same passion: contemporaries such as Jolivet and Schmitt; classics such as Bach, Boccherini and Haydn; romantics such as Dvořák, Brahms, Schumann, Bruch and Bloch; and early 20th century composers such as Prokofiev, Kodaly and Martinů

He died under the Tuscan sun that was so dear to him, his legacy a school of cello playing that is unique in the world and whose technique and phrasing can still be recognized in the playing of those who use it, from Heinrich Schiff, Frédéric Lodéon, Philippe Muller, Roland Pidoux, Marcel Bardon, René Bénédetti, Anne Gastinel, Valentin Erben, Dominique de Williencourt, Marcio Carneiro, Yvan Chiffoleau and Christophe Coin to Gautier Capuçon, Yan Levionnois, Xavier Phillips, Taeguk Mun, Victor Julien-Laferrière and Bruno Philippe. His perpetual, intense energy notwithstanding, Navarra leaves us with the image of a warm-hearted, unassuming man, who could, after a day alone with his cello, invite his students on the spur of the moment to fun-filled spaghetti parties. Pablo Casals, who admired Navarra’s free spirit, said to him at a competition in Mexico City, “Ah, there you are, André. The man who never comes when I invite him. I thought you were afraid of me. But no, the cello is your only love.”