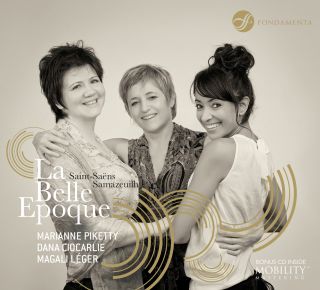 La Belle Époque brings us works composed during the lifetime of Marcel Proust: Saint-Saëns’ First Sonata for Violin and Piano was one of the sources of inspiration for Vinteuil’s Sonata in In Search of Lost Time. The CD also shines a spotlight on Gustave Samazeuilh (1877-1967), pianist, composer and musicologist, introducing three important facets of his work: his compositions for piano, his chamber music and his mélodies. The mosaic of works, most of which are still too infrequently recorded, form a scintillating, poetic portrayal of the era.

Trained in Romania, Dana Ciocarlie is a true heir to the Romanian school of piano. She furthered her studies in Paris under Victoria Melki, Dominique Merlet and Georges Pludermacher. Her encounter with German pianist Christian Zacharias was decisive in helping her deepen her approach to Franz Schubert’s piano works.

Immediately after completing completed her studies at the Conservatoire National Supérieur de Musique de Paris under Christiane Eda-Pierre and Christiane Patard, finishing with the first prize awarded by unanimous decision of the jury, Magali Léger took to the stage. In 2003, she was nominated in the Revelations of the Year category at the Victoires de la Musique Classique. She has worked with directors such as Laurent Pelly, Raoul Ruiz, Jérôme Deschamps, Macha Makeieff, José Montalvo, Dominique Hervieu and Daniel Mesguich. The conductors with whom she works include Marc Minkowski, Michel Plasson, Maurizio Benini and Emmanuelle Haïm,with her Concert d’Astrée ensemble.

Solidity, ardour, virtuosity, profundity and generosity – such are the words with which the press acclaims violinist Marianne Piketty, an artist who has developed an eclectic career ranging from Bach to Piazzola, and includes recitals, chamber music concerts, original duos, the classical repertoire, as well as little-known works and contemporary compositions.

Piketty was only seven years old when she made her solo debut at the Salle Pleyel in Paris. A graduate of the Conservatoire National Supérieur de Musique de Paris and the Juilliard School, where she was in the class of Dorothy DeLay, she also studied with Itzhak Perlman.