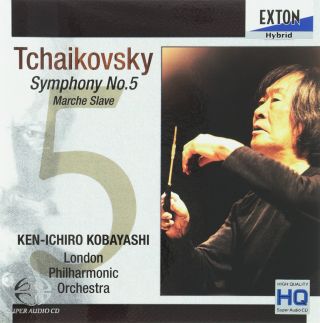 Catalog number: OVCL 00507
Releasedate: 08-12-17
- Fifth volume of a new complete edition of Tchaikovsky Symphonies
- On SACD, with the highest audiophile standards assured by Exton sound engineers.
Here is last but one issue in fortunate series by Kobayashi conducting Tchaikovsky's symphonies.
The Fifth Symphony is one of the most beloved and enjoys here a spectacular recording by the Exton team on SACD.
Ken-ichiro KOBAYASHI studied composition and conducting at the Tokyo National University of Fine Arts and Music. In 1974, he received both the first prize and the special award at the first International Conductor’s Competition of Hungarian Television in Budapest.
Presently KOBAYASHI holds positions at the Arnhem Phil. (Permanent Conductor), the Hungarian National Phil. (Conductor Laureate), the Nagoya Phil. (Conductor Laureate), MATAV Hungarian Symphony Orchestra (Principal Guest Conductor), and the Kyushu Symphony (Principal Guest Conductor).
He is also a professor at the Tokyo National University of Fine Arts and Music and a guest professor at the Tokyo College of Music.