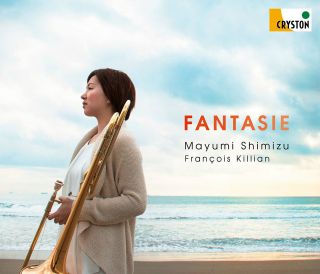 Catalog number: OVCC 00115
Releasedate: 08-12-17
- a disc devoted to compositions for trombone and piano
- most of the pieces are original for trombone (including Hindemith and Bozza), while some are transcriptions (Schumann and Saint-Saens)
- outstanding virtuoso Mayumi Shimizu conveys a real show-off of bravura and finesse

Was born in Kawasaki, Japan, started taking piano lessons at the age of five and began with the trombone when she was ten.
Before she was getting involved in professional trombone playing, she took her first degree in applied physics and physico-informatics at Keio University in Tokyo from 2000 to 2004, and continued these studies at master's level after graduation.
But after physic studies she followed her dream to become a professional trombone player and in 2005, she commenced her musical training in trombone at the Freiburg University of Music under Prof. Branimir Slokar. After graduating there in 2010, she continued her trombone studies always with M°Slokar.
In 2012, she completed her studies with excellent results and the world premier of the concerto for trombone and orchestra, 'Re-slide' of Vito Zuraj with Camerata Bern.

At the same time, she has gained experiences with several orchestras like the Berlin Philharmonic, the 'Deutsche Oper Berlin', the Berlin Radio Symphony Orchestra, the NDR Radiophilharmonie Hannover and the Saito Kinen Festival Orchestra.

In addition to her orchestral playing she is also active in performing solo recitals, chamber music and solo concertos with orchestra.
As a soloist she won several competitions like the Gdansk International Brass Competition in Poland and was invited to the international music festivals like IPV-Symposium and Thailand Brass Festival.
She is also working with composers to perform world premiere.