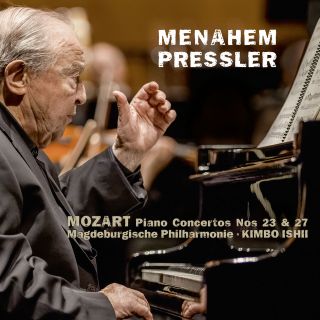 Catalog number: AVI 8553387
Releasedate: 03-11-17
- Menahem Pressler’s latest Concerto recordings, live from 2016
- The very likely oldest pianist (now with the age of 94) plays a very clear and intimate Mozart
- The Magdeburg Philharmonic under the baton of his musical Director Kimbo Ishii is a wellknown first class orchestra from the centre of Germany

“…..Pressler has played Mozart’s piano concertos with such frequency that they can be reckoned among the works that have occupied him the most in his life. Fortunately, a wish that Pressler and the musicians of the Magdeburg Philharmonic Orchestra had been having for many years finally came true: in May and December 2016, Pressler performed as a soloist in his home town. In May he performed Mozart’s Piano Concerto in B Flat Major K595, and in December he played the Piano Concerto in A Major K488. On the subject of Mozart, he remarks: “In Mozart there are no ‘empty’ passages. Musicians often just ‘play through’ a passage because they can play it well, and they are satisfied with that. However, if the interpretation of a passage has no content, I become adamant. I know it’s hard to phrase everything correctly. But I am still as critical as I ever was. First of all toward myself, then toward my co-performers.” Fortunately these concert performances in May and December 2016 were recorded. For a performer who had then reached the age of 92 (and who celebrated his 93rd birthday on the occasion of the second Magdeburg concert on 16 December 2016), one can hear that those aforementioned daily hours of practice have truly been worth the effort. Pressler, the experienced musician, phrases the piano part with unmatched
nuance. In the framework of moderately chosen tempi he masters every technical hurdle in each of these two masterpieces. Most of all, one can immediately tell that we are dealing with a pianist who not only knows very note of these concertos, but who has made each of them his own. Although Pressler has recently made several recordings on CD, these Mozart concerto recordings might be the last recorded testimony of one of the great performers of our time……”  (Excerpt from the Liner Notes)

As a soloist and chamber musician, Menahem Pressler is one of the most highly admired performers worldwide, and much in demand as a teacher. Even at the age of 93, the founder of the legendary Beaux Arts Trio is still involved in an ongoing search to uncover the “divine truth” contained in every musical composition.

Born in Madgeburg, Pressler had to flee Germany and emigrated to Israel in 1939, where he received most of his musical training. His artistic career began in the US when he won First Prize at the International Debussy Competition in San Francisco at the age of seventeen. Pressler’s début with the Philadelphia Orchestra under the baton of Eugene Ormandy was so successful that a number of appearances with the greatest orchestras in North America and Europe soon followed. In a series of extended tours, Pressler performed in all the major music venues of the world. Apart from having made over 50 LP/CD recordings with the Beaux Arts Trio, Pressler has also released over 30 recordings as soloist, performing works from Bach and Beethoven to Ben Haim. When the “venerable piano colossus” is not on tour or giving masterclasses, he is practicing and studying in his office studio at Indiana University in Bloomington. In 2005, German President Horst Köhler awarded him the German First Class Cross of Merit in Magdeburg, of which he was named Honorary Citizen on the occasion of a gala recital in 2009. Since then, Pressler has returned on a regular basis to perform with the Magdeburg Philharmonic. He was most recently invited to perform in the 4th Soloist Concert of the orchestra’s 2016/2017 season, and celebrated his 93rd birthday in his home town.