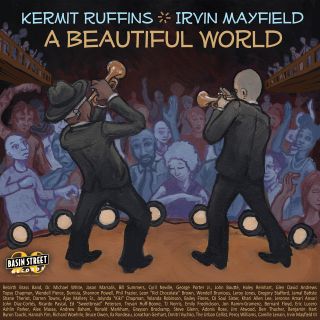 A Beautiful World is a collaboration between two friends, Kermit Ruffins, the big easy ambassador of good times and Rebirth Brass Band co-founder, who has appeared on HBO’s Treme, Bravo’s Top Chef, Late Night with Stephen Colbert, and the soundtrack for Disney’s Jungle Book in a duet with Bill Murray and backing Christopher Walken, and Irvin Mayfield, two-time Grammy-award winner, Billboard Music Award-winner, author, and producer. Combined, the two musicians share a staggering output of nearly fifty records, the majority released on Basin Street Records, an international independent music powerhouse that asked its two most recorded artists to collaborate on this centerpiece of the label’s 20th anniversary celebration. A Beautiful World is the ultimate party in record form. Producer Mayfield worked tirelessly to translate the eclectic soul of Kermit Ruffins to twenty-six tracks. On the process of making the album, Ruffins explains, “Good food and good music are my passions. I wanted to make a record people could eat.”

In March 2017, Mayfield launched his latest project, Cirque du Freque — the marriage of technology and soul. It's a party EVERY Monday night with Cirque du Freque and Kermit Ruffins at the Mother in Law Lounge in the famous Treme neighborhood of New Orleans.