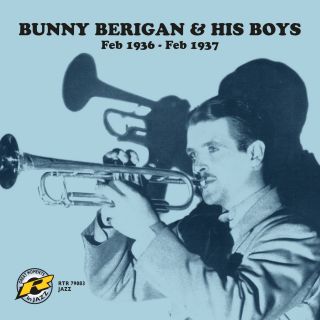 Bunny Berigan & His Boys, Feb 1936 - Feb 1937 is another great release by Retrieval Records, a division of Challenge Records. Retrieval is one of the finest examples of a record label offering some historical rereleases.

It was Louis Armstrong who said,  “Bunny was great, but had no business dying that young.” Bunny was born Rowland Bernard Berigan, in Calumet, Wisconsin, on 1 November 1908, and died in New York on 2 June 1942 at the age of 33. In his short carreer, he blazed across the musical sky like a comet, reaching heights that no other white trumpeter of those times had been able to reach, before sputtering out into sad and sorry alcoholism.

Roland Bernard "Bunny" Berigan (November 2, 1908 – June 2, 1942) was an American jazz trumpeter and bandleader who rose to fame during the swing era, but whose career and influence were shortened by a losing battle with alcoholism that ended with his early death at age 33 from cirrhosis. Although he composed some jazz instrumentals such as "Chicken and Waffles" and "Blues", Berigan was best known for his virtuoso jazz trumpeting. His 1937 classic recording "I Can't Get Started" was inducted into the Grammy Hall of Fame in 1975.
Source: wikipedia