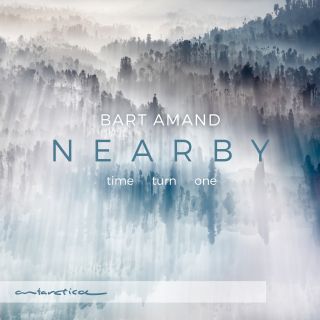 NEARBY time turn one (EP)

Catalog number: AR 005
Releasedate:
- A first "taste" of a record that is coming next year (March 2018)
- Will play support shows for Jan Swerts this fall

“Nearby  - time turn one”  is the new EP by Bart Amand, and brings a whole new colour to his work.

“Nearby  - time turn one”  describes the unknown, the principles of a new mankind, moving through the universe, in the glance of the first light.

“Nearby  - time turn one”  was recorded as 1 track, where the "ice violet" moves through the 3 tracks as a "morning glory" and theme.

“Nearby  - time turn one”  is mysterious, inspiring, small and big at the same time.

At his parents’ house he first was introduced to classical music. Between all these albums he discovered the rather experimental first works of Vangelis, which immediately took his interest. He started playing the piano at the age of 9.  Later on Bart Amand went to study at the conservatory in Antwerp (Belgium) but soon he got more interested in playing with ensembles to develop his own ideas while listening  to the music of Keith Jarrett, Philip Glass, Michael Nyman, Wim Mertens, ... .

After having played as a keyboard player in some pop configurations he founded BAR8 in 1996. Through an ensemble of two violins, one cello, two saxes and later on with some battery & percussion his compositions were still a mix of instrumental music and songs. In 2000 the band recorded ‘Dwarfish spectacles’.

Working together with several people such as dance-choreographers and on several different  multimedia, theatre, .. He started to sharpen his ideas and brought his work back to its basics by only playing solo piano work. Out of a list of more than 50 tunes he has brought a period of nearly 6 years together in the album ART BRUT, which was released in 2010.

Later on he started to write again for quartet (piano/violin/soprano saxophone/cello) and recorded a new ‘enlightened’ CD called: “SIREN”. The CD was released in 2012.

The music of Bart Amand can be read as a collection of poems. The compositions often are a proposal ‘to look’ in a certain direction, having a three dimensional character, creating more than a theme or a song to listen to.