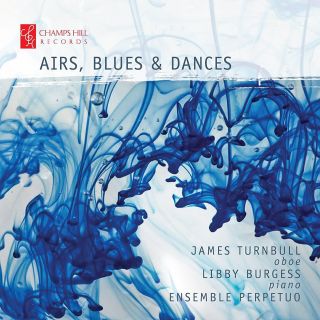 I am thrilled to have returned to Champs Hill to record my third recital disc. Selecting the repertoire to include has been a fascinating journey for me. I have always held the firm belief that there is a varied and rich repertoire for oboe that is so often underestimated. In seeking new music to perform and record in recent years I have become evermore certain that this belief is justified.

I set out to find contemporary oboe music that is not only of the highest quality but would be approachable to audiences who may not have heard the oboe in a solo context before. The resulting collection features some of my favourite oboe repertoire of the past thirty years. It is the contrast between compositions that fascinate me most about the music we recorded. For example, the exploration of Blues music by David Matthews feels far away from the colours and evocative music of Anthony Powers or Helen Grime. The Four Country Dances and Music for a Lovelorn Lenanshee both share a focus on folk music yet contrast one another so clearly in style. The two featured chamber works balance the solemn wind quartet by John Tavener with the energy and drive of the wind trio by Judith Weir.

James Turnbull explores rich and varied repertoire of the past thirty years, showcasing the versatility of writing for the oboe in solo repertoire. “It is the contrast between compositions that fascinate me most about the music we recorded.”

The recital disc opens with Tippett’s autumnal prelude, arranged for oboe and piano by Meirion Bowen, the composer’s personal assistant and biographer.

Richard Rodney Bennett remained fascinated by John Playford’s country dances, setting them for a variety of instruments. There’s a folk music link with Jonathan Dove’s Music for a Lovelorn Lenanshee, which takes inspiration from the popular song ‘My Lagan Love’ from County Donegal, and first published in 1904 and popularized by John McCormack

The evocative colours of Anthony Powers’ In Shadow are a sound-world away, where amongst other effects, he creates myriad colours from the marriage of piano pedal notes and high-lying melodic lines

Charlotte Bray’s Late Snow for solo oboe was inspired by M.R. Peacocke’s eponymous poem, a striking expression of the transition from life to death and beyond.

David Matthews’ Montana Taylor’s Blues is named for Arthur ‘Montana’ Taylor , whose high-octane boogie-woogie and inventive blues playing attracted a cult following among jazz fans in the 1940s. Matthews says: “I was particularly struck by the poignant harmony which suggested that Taylor must have heard some classical music – Schubert? – during his itinerant life.”

Joseph Phibbs’ Vocalise, created in 2005, is conditioned by the effortless simplicity of the miniature work’s oboe melody and enhanced by the shimmering beauty of its piano part.