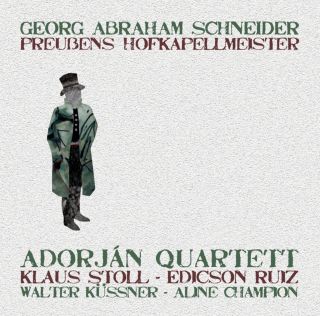 Catalog number: PHIL 06009
Releasedate: 01-10-21
GEORG ABRAHAM SCHNEIDER: PRUSSIA'S HOFKAPELLMEISTER Although Georg Abraham Schneider is virtually unknown nowadays, he was a significant figure in early nineteenthcentury music in Berlin, where he was active as a musician, concert promoter, and composer. He was born in Darmstadt in 1770, the same year as Ludwig van Beethoven. After receiving a thorough grounding in all musical instruments apart from the piano, he joined the Darmstadt court orchestra in 1787. In 1795 he moved to the court at Rheinsberg, which was the seat of Prince Henry of Prussia, the brother of Frederick II. When Prince Henry died in 1802, Schneider became a member of Berlin’s court orchestra. However, the orchestra was disbanded after Napoleon defeated Prussia in the twin battles of Jena-Auerstedt, and the royal family subsequently fled. Schneider suddenly found himself without a job. The flute quartets Op. 52/3 and Op. 69/3 could well have been composed around 1810, while Schneider was without regular employment; they were certainly published before 1815. They were undoubtedly modeled on Mozart’s flute concertos, both in the musical and textural structure and in the treatment of the flutes. Both quartets have only three movements – lacking the minuet, which was not well liked in Berlin – and the flutes very clearly take center stage. They are nevertheless genuine pieces of chamber music rather than flute concertos, for the strings play a significant role not only during the bridge passages, but also in introducing the themes. This becomes particularly obvious in the andante of Op. 52/3, a series of variations in which, after the introduction of a simple theme reminiscent of Haydn’s slow movements, the viola, the cello, and finally the violin take the lead in turn and all the instruments alternate at the end. While the quartet Op. 52/3 in G Major is characterized by an air of untroubled joviality, especially in the first and last movements, the quartet Op. 69/3 has a very different tone. The absence of cello and the pulsating eighths in the accompaniment at the beginning are suggestive of Mozart’s late string quintet in the same key. Both works also have the same fragmentary structure, with sudden interruptions of motion and expansive harmonic passages. Only the slower, middle movement counters with a musical idyll that is replaced by nervous triplet motion in the final movement. Schneider thus demonstrates his skill in what his contemporary Heinrich Christoph Koch called the main function of music as an aural art form: the all-embracing expression of perceptions and passions (see the article “Empfindung” [Perception] in his Musikalisches Lexikon dating from 1802). Duets for strings had been fashionable since the late eighteenth century. They were treated both as teaching material and as an intrinsic part of bourgeois parlor music, enabling people to listen to the wider world of the concert hall in their own sitting rooms. Early works were written by Michael Haydn and Mozart (duets KV 423, 424), by Beethoven (“Eyeglass” duet for viola and cello), and by Spohr and other violin virtuosos; there was also an abundance of arrangements of the most recent operas and symphonies. In addition to his works for violin and viola, Schneider wrote numerous other duets for diverse instruments, primarily for two flutes, two clarinets, and two horns. An 1833 catalogue of works penned by Schneider himself lists fifty duets for two bassoons, although very few of these seem to have survived. Schneider would certainly have approved of the way that several pieces for two double basses have been adapted in this recording. They are intended as educational material, but for two players of a similarly high standard who can set an exhilarating dialogue in motion while simultaneously developing their technical skills and musicality. So although these pieces are not overly long, they can be interpreted as an encyclopedia of the music of the time: its compositional techniques, its character, its figurations and playing techniques. The music on this recording is full of wit, enthusiasm, and vitality; it illustrates perfectly where Schneider’s strength lay, namely in considering the benefits for the player as well as the effect on the audience.