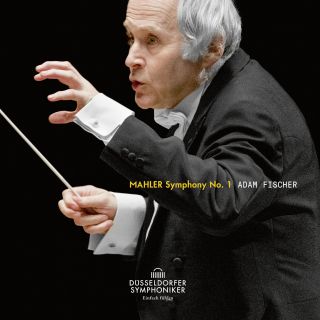 -    Now the third issue of the planned complete cycle

-    There are parallels between Mahler’s live and Dam Fischer’s live, both were Musical Directors in Vienna, Budapest and Kassel with similar experiences

(from his remarks in the booklet)

“I am delighted to perform and record the complete symphonies of Gustav Mahler with the Düsseldorfer Symphoniker. The result, we hope, should be something special: a rendition that stems from an active collaboration in which we mutually inspire one another. This should not be “my” Mahler, but “our” Mahler……..

Gustav Mahler premiered his First Symphony at the age of 29. For personal reasons I feel a close bond with that 29-year-old Musical Director of the Hungarian State Opera. 120 years later, I was named General Music Director of the same opera house. We both hastily abandoned the institution after 2 1/2 years. I would still like to relate a personal reminiscence of one of the performances of “my” First Symphony. The First Symphony was the first occasion I ever heard music by Mahler live on stage: in Vienna when I was nineteen years old, and the experience marked me for life.

At the beginning of the 2015/16 season, Adam Fischer was appointed Principal Conductor of the Düsseldorfer Symphoniker and Artistic Consultant of the Düsseldorf Tonhalle. He is also Honorary Conductor of the Austrian-Hungarian Haydn Orchestra, founder of the Eisenstadt Haydn Festival, and founder and director of the Wagner Festival in Budapest. Well-known for his courageous political commitment, Adam Fischer has spoken out often in favor of human rights. Together with András Schiff he initiated and signed a petition against racism and discrimination, which they submitted to the European Union.

Born in 1949 in Budapest, Adam Fischer studied composition and conducting in the Hungarian capital, and with professor Hans Swarowsky in Vienna. After appointments as Kapellmeister in Helsinki, in Karlsruhe and at Munich State Opera, Fischer held the post of General Music Director successively at the opera houses of Freiburg, Kassel and Mannheim, and was also Music Director of Hungarian State Opera in Budapest. Since 1999 he has been Chief Conductor of the Danish National Chamber Orchestra in Copenhagen.

Regular engagements have led Adam Fischer to perform in the great opera houses of Europe and the US, including Vienna, Milan, Munich, Covent Garden, the New York Met and Bayreuth Festival. In orchestra appearances he also conducts the Vienna Philharmonic, the Vienna Symphony, the Munich Philharmonic, the Orchestre de Paris, the London Philharmonic (LPO), the Orchestra of the Age of Enlightenment, the Chicago and Boston Symphonies and the NHK Symphony in Tokyo. Fischer’s award-winning CD releases include the complete symphonic works of Haydn (distinguished with the German national prize “Echo Klassik”) as well as of Mozart. He has also been awarded the Grand Prix du Disque twice: for his recordings of Die Königin von Saba (Goldmark) and of Bluebeard’s Castle (Bartók). In 2017, Adam Fischer was named Honorary Member of Vienna State Opera.