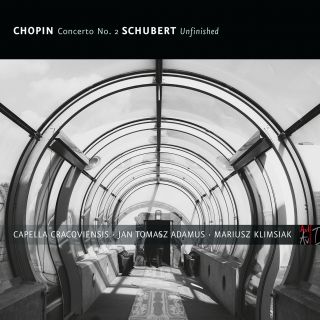 -    Recorded already for the Universal’s Deutsche Gramophone, Decca and other major labels

-    The two most well known pieces of the late classical / early Romantic periods on one CD on period instruments.

Period instruments from Poland CAPELLA CRACOVIENSIS was established in 1970 on the initiative of the then director of the Cracow Philharmonic, Jerzy Katlewicz, who entrusted Stanisław Gałonski with the mission to form an ensemble that would specialize in early music. Over the course of the years, the group has become organizationally independent, featuring highly diversified repertoire from the Middle Ages to world premieres of contemporary music. In November 2008, Jan Tomasz Adamus was named its executive and artistic director.

The repertoire of Capella Cracoviensis is thoroughly eclectic, ranging from Renaissance polyphony to Romantic operas, performed on period instruments and staged according to the guidelines of historical performance practice. With unswerving support from the City of Cracow, the band is able to bring its artistic ideas to life on a world-class artistic level, without compromises. CC is often invited to major festivals and concert halls, such as Bachfest Leipzig, Schwetzingen SWR Festspiele, Händel Festspiele Halle, Haydn Festspiele Brühl, Opéra Royal Versailles, Theater an der Wien, NOSPR Katowice, the Szczecin Philharmonic, and is frequently a guest in Brussels, Ghent, Lvov, Riga, Tallinn, Yerevan, Tbilisi, and Kiev.

Mariusz Klimsiak is the laureate of the Third 20th Century Music Competition in Warsaw, the Festival for Young Musicians in Gdansk, the Third all-Polish F. Chopin Piano Competition in Warsaw, and the International Piano Festival in Sanok. He graduated with distinction from the Academy of Music in Bydgoszcz under Professor Jerzy Sulikowski, and he further completed his training in masterclasses taught by Ewa Pobłocka, Katarzyna Popowa-Zydro´n, Naum Starkmann, Aleksjej Orłowiecki and Viera Nossina. In 2009, Mariusz Klimsiak was awarded the title of Doctor of Musical Arts.

The artist gave his public debut at the age of fifteen; he has performed with the National Philharmonic, the Wroclaw Philharmonic, the Lower Silesian Philharmonic and the Lublin Philharmonic. The pianist participated in Ła´ncuch IV (the Chain Festival) in Warsaw, the Forum Musicum Festival in Wroclaw, the Lutosławski Forum Festival in Warsaw, the Festival of Polish Pianism in Słupsk, and the International Bach Festival in ´Swidnica, as well as in artistic events in Italy (Florence), Spain (Alicante) and the US (Seattle, San Francisco). With the Lower Silesian Philharmonic under Jerzy Swoboda he went on tour in Germany. He has performed with Mariusz Patyra, with the Silesian String Quartet and with Capella Cracoviensis. Klimsiak’s repertoire spans a wide variety of periods and styles, ranging from the Baroque age to contemporary music.

Jan Tomasz Adamus is a conductor, organist, harpsichordist and cultural promotor specializing in the period performance of classical music ranging from Renaissance polyphony to Romantic symphony and opera. After his studies in Krakow and Amsterdam, he taught at the Academy of Music in Wrocław for a number of years. Many outstanding works of international musical repertoire have been performed for the first time on period instruments in Poland under his baton: Bach’s St Matthew Passion; Handel’s Messiah, Theodora, Hercules, Amadigi, Sosarme, Tamerlano and Rodelinda; Beethoven’s Missa solemnis; Mozart’s Le nozze di Figaro and Don Giovanni, to name just a few. He has performed at a number of prestigious festivals and venues in Poland, Germany and further afield. In 2008 Adamus was appointed General and Artistic Director of Capella Cracoviensis. As a cultural creator and promotor, Jan Tomasz Adamus stood behind the launch of Theatrum Musicum, a joint project developed by the music institutions of Krakow, where one of the largest classical music scenes in Europe has been developing. Since 2000, Adamus has been Artistic Director of the Bach Festival Swidnica, a remarkably organic, culturally creative event which is one of the largest and most highly regarded festivals outside the major centers of European musical life. Adamus’s numerous recordings include solo organ repertoire, Polish early music, Romantic repertoire on period instruments (Chopin, Schubert), and contemporary music (Arvo Pärt). Recently, together with Capella Cracoviensis, he has enacted a number of extremely innovative stage projects including operas, crossover projects and social performances (Mozart’s Le nozze di Figaro, Händel’s Amadigi di Gaula, Gluck’s Orpheus and Eurydice, Monteverdi in a milk bar, Mendelssohn performed by a choir in the forest, and Mozart’s Requiem as karaoke). He is involved in the work of Opera Europa, an international organization for opera houses and festivals from around the world.