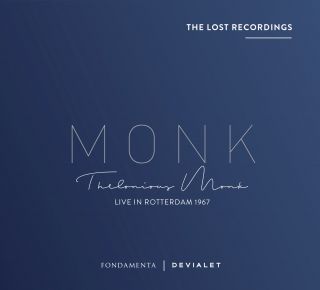 When he set foot on the stage of Club Doelen on Oct. 28, 1967 in Rotterdam, Thelonious Monk had just turned 50.  15 years later, he disappeared from the music scene and spent his 6 final years in New York, at Pannonica de Koenigswater's, and never touched a piano again.

This concert is a testament to his genius. Opening and ending with two “classic pieces”, “Ruby, My Dear” and “Blue Monk”, he led for over 80 minutes the quartet and his accomplices, Charlie Rouse, Larry Gales, Ben Riley, and guests.

Larry Gales's bass seems to pop out like a jack-in-the-box at the end of “Hackensack”, the brass instruments get carried away towards the middle of “We see”, and billow out and away in the breathtaking “Oska”. And it all leads to a solo time on “Don't Blame Me”: his fingers must be widely spread apart as he hits the keys the way you'd hit and shuffle cards. And then it's time to conclude with one of his classic tunes “Blue Monk”. The architect can set down his tools, what remains is pure art.

The most important jazz musicians are the ones who are successful in creating their own original world of music with its own rules, logic, and surprises. Thelonious Monk, who was criticized by observers who failed to listen to his music on its own terms, suffered through a decade of neglect before he was suddenly acclaimed as a genius; his music had not changed one bit in the interim. In fact, one of the more remarkable aspects of Monk's music was that it was fully formed by 1947 and he saw no need to alter his playing or compositional style in the slightest during the next 25 years.