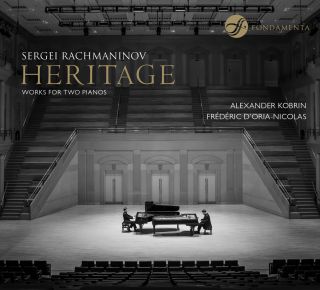 Catalog number: FON 3708512
Releasedate: 08-12-17
- This album was designed to reveal a portrait of Rachmaninov’s entire work
- Containing 4 cd's for the price of 2 cd's:
The Fidelity CD is the version of reference for high-fidelity audio systems.
The Mobility CD is the version adapted for computers, nomad and car sound systems.


This album was designed to reveal a portrait of Rachmaninov’s entire work through these three compositions for two pianos written at different times of his life. Heritage was named, in 2014, at the ICMA as the best chamber music album of the year category.

BBC Russia named Alexander Kobrin the “Van Cliburn of today”, putting him in the front row of musicians of his generation.

Internationally acclaimed pianist Alexander Kobrin was born in 1980 in Moscow. At the age of 5 he entered the Gnessin’s Special School of Music, where he completed his studies with prof. Tatiana Zelikman, and went on to further his skills at the Moscow Tchaikovsky Conservatory with prof. Lev Naumov. Alexander Kobrin is the winner of numerous international piano competitions - notably the Van Cliburn International Piano Competition. He was also the winner of Busoni, Hamamatsu, and Glasgow International Piano Competitions. Since receiving the Gold Medal at the 12th Van Cliburn Competition in June 2005, Alexander has solidified his reputation with an outstanding first tour of the United States. Past performances include recitals at Bass Hall for the Cliburn Series and the Washington Performing Arts Society, followed by further debuts at La Roque d’Anthéron, the Ravinia Festival, the Beethoven Easter Festival, the Hannover Prize Winners Series, the Enescu International Festival in Bucharest, and the Klavier-Festival Ruhr, with critics praising his “interpretative musicianship [and] considerable insight,” and his “elegance, grace, and spirit.”

Alexander Kobrin’s debut with the New York Philharmonic at Avery Fisher Hall and the inaugural concert of the Bethel Woods Arts Centre was hugely successful; critics praised his “lyricism, which he couched in a thoughtfully shaped, singing line,” noting, “when he addressed the barnstorming passages on their own terms, he did so with a steely edge and ample - if thoroughly controlled - force.” Other noteworthy critical acclaims include reviews in New York Times and Gramophone Magazine - describing his playing as “memorably personal and stylish” and “hypnotic.” Alexander showed the strength of music in yet another way in 2005, when he was the first to give a charity recital in New Orleans, Louisiana after hurricane Katrina.

Though acclaimed as a performer, Alexander Kobrin, as a teacher, has been a true inspiration to students through his passion for music. He served on the faculty of the Gnessin’s Academy of Music from 2003 to 2010. Since 2006 he has been on the faculty of the IKIF at Mannes College of Music, and is now the “L.Rexford Whiddon Distinguished Chair in Piano” at Schwob School of Music at Columbus State University. In 2013, he joins the Artist Faculty of Steinhardt School for Piano Studies at New York University.

"A pianist of wide culture, with a keen intelligence, sensitivity, open-mindedness and imagination in keeping with his extraordinary virtuosity", Frédéric D’Oria-Nicolas is "an exceptional, subtle, powerful and elegant pianist" Classiquenews, "a master of symphonic storms and images" Midi-libre, The intelligence of his programs, his generous personality and the particularly warm contact which he maintains with his audience do make him an exceptional artist.


Frédéric D’Oria-Nicolas has graduated from the Moscow State Gnesin Academy of Music from the class of Professor Tatiana Zelikman. He has also received the advice of distinguished musicians such as Dmitri Bashkirov, Lev Naumov and Vladimir Tropp. His career has been punctuated with many awards: the ADAMI Classical Revelation, the First prize at the Saint-Petersburg Mravinsky Competition. He has also been rewarded by the Bleustein-Blanchet Vocation Fund, the Charles Oulmont Fund and the Mécénat Musical Société Générale. In 2009, he was elected "Artist of the Year 2009" by Resmusica.

His record dedicated to Schubert for the Fondamenta label was unanimously greeted by critics: "From the very beginning of the D960 Sonata, we are struck by a very beautiful sound which leads us into that outstanding piece as in a dream. Indeed, such sound control isn’t given to everyone and contributes to the bewitchment we feel" Pianiste Magazine "Frédéric D'Oria-Nicolas has captured the essence of the twenty-third sonata outstandingly. In addition to the exceptional sonority, the style is natural, steady, assured and elegant" Concertonet "His vision is both spectacular and humble, never forced upon us but always guided, so that it leaves us in suspense, plunged into a musing close to ecstasy" Resmusica.

In 2010 Frédéric D’Oria-Nicolas along with the violinist Svetlin Roussev recorded the 3rd sonatas by Grieg and by Medtner for the Fondamenta label. That recording was acclaimed by the major critics in all Europe and was granted prestigious awards, such as the « M » of Mezzo Channel, Choice of France Musique, Resmusica Key, 4 Stars Classica, 5 Diapasons. "Remarkable interpretation, all in sensitivity full of images and emotions is worthy to the one recorded in 1928 by Kreisler and Rachmaninov" L’Education Musicale "A fascinating recording" Presto Classical "That recording with its attractive presentation and its impeccable sound recording exudes the love for music: a harmonious work of architecture and passion" Concertonet "Roussev and D’Oria-Nicolas managed perfectly to bring to mind orchestral sonorities imagined by Medtner with wonderful tonal vibrancy and arresting colouring." Classic FM Magazine

As a popular chamber music partner, Frédéric D’Oria-Nicolas plays with Svetlin Roussev, Alexander Kobrin, Lise Berthaud, Xavier Phillips, Nicolas Dautricourt, François Salque, and Laurent Naouri. This has led him to take on the artistic direction of Fondamenta Productions in July 2008.