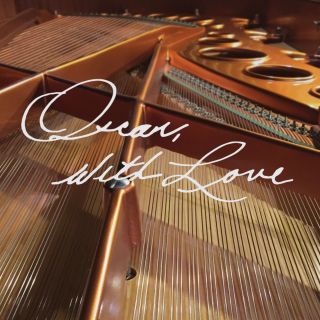 Catalog number: MACDX 1134
Releasedate: 08-12-17
- o-card is 8 5/8” wide by 6 7/8” long (rectangular) — hard back book fits into the o-card
- First 3 pocket panels in the book are cardboard and each holds a CD with the track listing and a photo
- The book contains 100 pages of notes and commentaries from the producers and artists along with extensive photos in color and b+w
- The International release of this project coincides with Oscar’s passing ten years ago
- Features compositions previously unreleased by Peterson
- Feauturing artists such as: Chick Corea, Monty Alexander, Ramsey Lewis, Kenny Barron, Benny Green, Oliver Jones, Makoto Ozone, Renee Rosnes and Bill Charlap

scar, With Love not only features compositions previously unreleased by Peterson, but all are performed in Peterson’s home studio on his Bösendorfer Imperial piano. Never has there been such a recording, various artists performing on the personal instrument of a jazz legend. “Oscar cherished his piano,” said Kelly Peterson, executive producer of the new recording. “It is one of the finest and most unusual instruments in the world. Oscar handpicked it at the Bösendorfer factory in Vienna in 1981. It has never been heard publicly.” Tremendous care was taken to fully capture the outstanding performances of these great artists and the magnificent sound of Peterson’s Bösendorfer Imperial.

The set showcases Oscar Peterson as a composer and includes the world premiere of several pieces he wrote but never recorded; the compositions were retrieved from Peterson’s library for the project. Most of the music on the recording was written by Peterson, or for him by some of his closest musical friends. It is these friends and colleagues who performed on the recording. Together, these musicians have won 30 Grammy® Awards, Latin Grammys, Oscars, Golden Globes, British Academy of Film and Television Arts (BAFTA), and several Juno awards.

Oscar Peterson was one of the greatest piano players of all time. A pianist with phenomenal technique on the level of his idol, Art Tatum, Peterson's speed, dexterity, and ability to swing at any tempo were amazing. Very effective in small groups, jam sessions, and in accompanying singers, O.P. was at his absolute best when performing unaccompanied solos. His original style did not fall into any specific idiom. Like Erroll Garner and George Shearing, Peterson's distinctive playing formed during the mid- to late '40s and fell somewhere between swing and bop. Peterson was criticized through the years because he used so many notes, didn't evolve much since the 1950s, and recorded a remarkable number of albums. Perhaps it is because critics ran out of favorable adjectives to use early in his career; certainly it can be said that Peterson played 100 notes when other pianists might have used ten, but all 100 usually fit, and there is nothing wrong with showing off technique when it serves the music. As with Johnny Hodges and Thelonious Monk, to name two, Peterson spent his career growing within his style rather than making any major changes once his approach was set, certainly an acceptable way to handle one's career. Because he was Norman Granz's favorite pianist (along with Tatum) and the producer tended to record some of his artists excessively, Peterson made an incredible number of albums. Not all are essential, and a few are routine, but the great majority are quite excellent, and there are dozens of classics.