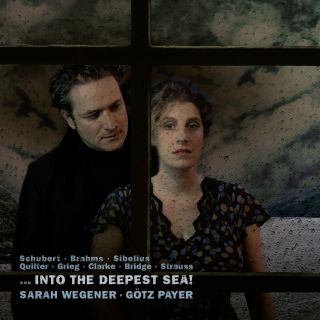 -    First Solo Recital by Sarah Wegener, a young German soprano with a great career already singing on all big opera houses and concert platforms all over the world

-    Sarah Wegener, bilingual with a British mother, and her partner Götz Payer are following a stringent path with the selection of Lieder through the centuries along the theme of the sea and ocean

“In this day and age, why another CD featuring art song? From different sources we hear that art song is going through a crisis, and that the traditional vocal recital format lacks an audience and is no longer up-to-date.

Many people seem to regard the Lied genre as elitist, musty and outmoded. How can one explain this? The act of singing, in itself, cannot be the problem. People are fortunately still singing in many different contexts and venues: in nurseries, schools, choirs, in the shower, and in television contests. What comes more naturally to a human being than singing songs? Perhaps we should avoid terms such as “Lied” and “art song”. They might sound too artificial. Perhaps the supposed lack of interest has to do with the texts, which are sometimes more than two centuries old…

Nevertheless, for us the answer is clear: these songs and texts have lost nothing of their current relevance. They still have the capacity to profoundly stir the emotions of listeners and performers. In short: the “Lied” lives on!..... Like the forest, the sea is a literary topos of yearning: elementary and profound like love itself, as stormy as unbridled passion. And it can become the place where we meet face to face with Death…..

Two particular aspects were important to us in making this recording. On the one hand, we wanted to avoid the above-mentioned artificiality by striving to make music in a passionate, authentic manner, following the natural curves of speech. This inspired us, in turn, to apply a thoroughly personal, undogmatic approach to the songs we had chosen. On the other hand, we knew we did not want to amass a loose collection of songs or groups of songs. We wanted to have a unifying element, a thread that would run through the entire programme and would enable us to feature the most varied types of composition alongside one another in a meaningful way………”

The soprano Sarah Wegener is on the best path to a great career (...). Sarah Wegener wants to, and can, sing everything. SWR, 2012

Sarah Wegener enthrals listeners with the richness and warmth of her voice and approaches every role in a chamber musical way, whether it be contemporary, classical or romantic repertoire. She regularly works with Philippe Herreweghe, Thomas Hengelbrock, Emilio Pomàrico, Tonu Kaljuste, Heinz Holliger, Frieder Bernius and Michael Hofstetter. Concerts and recitals have taken her to the Schleswig-Holstein Musik Festival, RuhrTriennale, Rheingau Music Festival, Konzerthaus Berlin, Tonhalle Zurich, Wiener Konzerthaus, and to the Bozar Brussels.

Highly regarded as a performer of both classical and romantic repertoire, as well as contemporary compositions, Sarah Wegener recently sang Dvořak’s Stabat Mater and Haydn’s Sieben letzte Worte (Philippe Herreweghe, Orchestre des Champs- Élysées, Collegium Vocale Gent), Beethoven’s Funeral Cantata and Mass in C major (Hans- Christoph Rademann, Deutsche Kammerphilharmonie Bremen, Gächinger Kantorei Stuttgart), and, in a sensational concert in Graz, Strauss‘ Vier letzte Lieder. In 2015 she made her debut with the NDR Symphony Orchestra under Thomas Hengelbrock performing Jörg Widmann’s Dunkle Saiten. The composer previously dedicated the solo part in his work Labyrinth III to her, which she premiered in 2014 to great acclaim at the Kölner Philharmonie with the WDR Symphony Orchestra under Emilio Pomàrico. Further performances of the piece took her to the Concertgebouw Amsterdam (Emilio Pomàrico, Radio Filharmonisch Orkest) and Casa da

Sarah Wegener has formed a close artistic relationship with the composer Georg Friedrich Haas. In the 2015/16 season she made her debuts at the Royal Opera House London and Deutsche Oper Berlin in his new opera Morgen und Abend. The composer also dedicated the Lieder cycle ...wie stille brannte das Licht to the soprano, drawing on her unique ability to interpret microtonal music. She was nominated for “Singer of the Year” by Opernwelt magazine in 2011 for her interpretation of the main role of Nadja in his opera Bluthaus, which she performed at the Schwetzinger SWR Festival, Theater Bonn, Wiener Festwochen, Kampnagel Hamburg and Staatstheater Saarbrücken. She returned to Schwetzingen in 2013 with the opera Thomas and Dido for string quartet and soprano. She also sang Haas’s composition ATTHIS with the Ensemble musikFabrik at the Philharmonie Luxembourg and with musicians of the Bavarian Radio Symphony Orchestra as part of musica viva.

Sarah Wegener will kick off the 2016/17 season with her first collaboration with Kent Nagano and the Orchestre Symphonique de Montréal: she will perform Mozart’s Requiem, Beethoven’s Symphony No. 9, Bach’s St. Matthew’s Passion and Brahms’s Ein Deutsches Requiem in several concerts in Montréal. She will also sing Bach’s Christmas Oratorio on tour with the Basel Chamber Orchestra as well as Mozart’s Litaniae and Schubert’s Mass No. 5 with the Radio Filharmonisch Orkest at the Concertgebouw Amsterdam. In celebration of the inauguration of the Hamburg Elbphilharmonie she will perform Mahler’s 8th Symphony with the Philharmonisches Staatsorchester Hamburg and Kent Nagano. Recitals will also take her to the SWR RheinVokal Festival and the Halle Handel Festival.