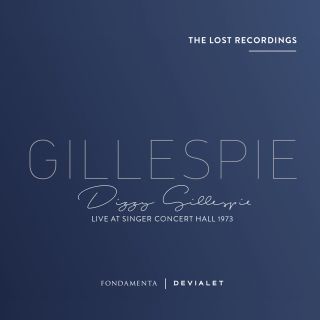 In view of the work of new musicians of the same period, such as Miles Davis, Frank Zappa and the Art Ensemble of Chicago (to name only three representatives of the exceptional creative effervescence of this enchanted fleeting period in musical history), at this specific moment in his career Dizzy Gillespie might conceivably have given his peers the impression that he was resting on his laurels. However, the passing of time and the rediscovery of unpublished recordings such as  the one of this 1973 concert in Laren give a fresh, dispassionate perspective  on the music that the artist was making then, and help put peremptory  judgements into context. With hindsight, there appears to have been a schism within the Gillespie of the 1970s: he readily agreed to go on high-profile tours in line with legends of bebop (such as the Giants of Jazz in 1971) where, following tradition, he would give performances “of himself”, while he could call himself into question, return to the framework of his usual small bands that were familiar yet experimental, rediscovering there, as if by magic, his style – cutting-edge, inventive, virtuoso and exuberant – and his ever-intact joy in performing.

Dizzy Gillespie, barely twenty years earlier a visionary musician and genuine revolutionary, the co-founder of bebop with Charlie Parker and Thelonius Monk, as well as the veritable matchmaker behind the sensual fusion of Afro-Cuban rhythms and modern jazz, was no exception to this massive movement that stripped jazz of its former standing. He was famous far beyond the inner sanctum of jazz lovers: his clowning antics, exaggerated by his legendary outsized jowls, gave the image of a jester blowing endlessly into an improbably shaped angled trumpet with its copper bell splendidly facing skyward. But to an audience in the thrall of new sounds, new grooves, new attitudes, Gillespie suddenly appeared to be a mere caricature of his past glory, conveying an image of jazz that was joyful, carefree, and certainly spectacular … but decidedly irrelevant